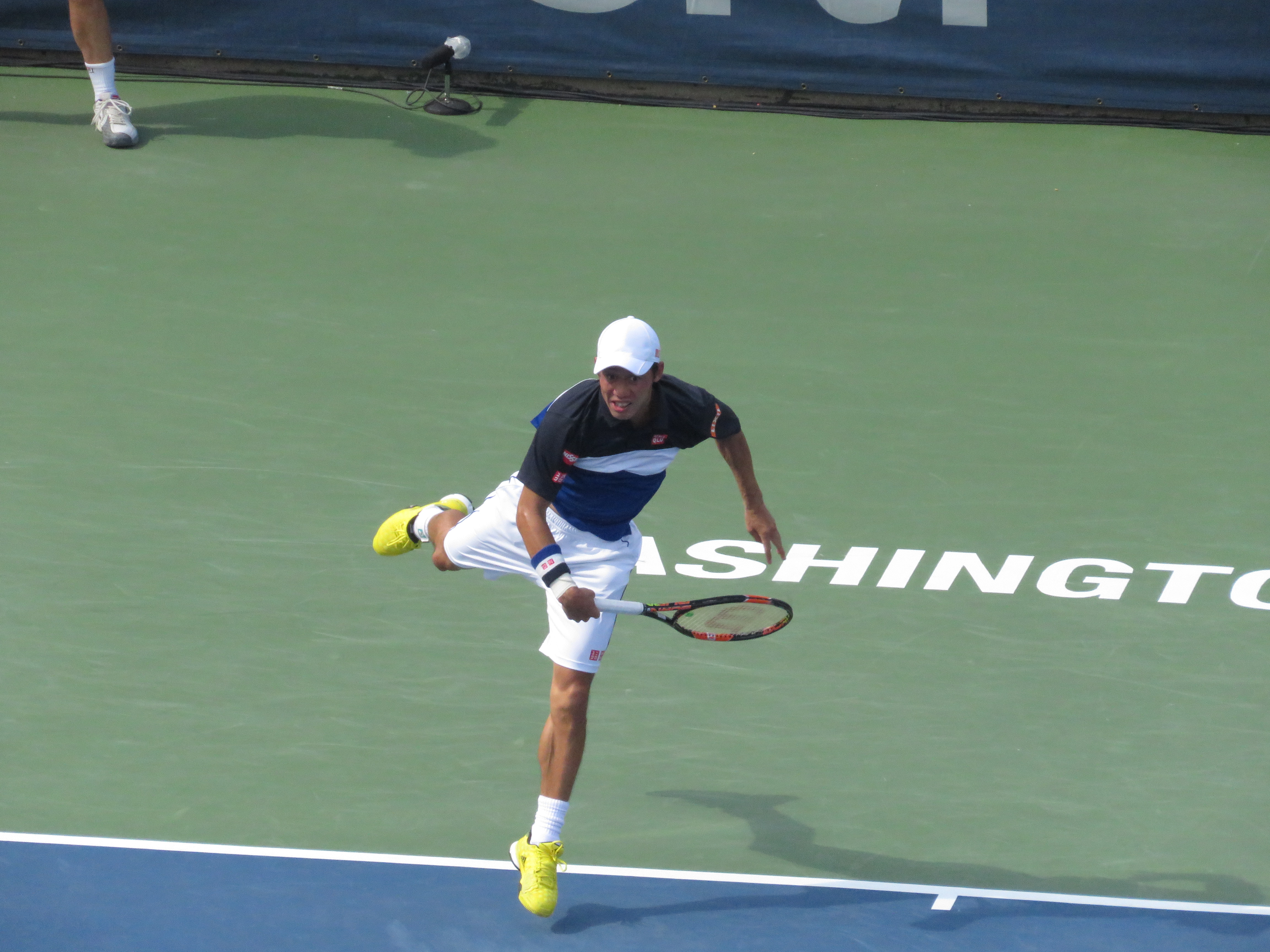 Washington DC (Tennisfiles) – In a rematch of last year’s US Open final, Japanese sensation Kei Nishikori defeated Marin Cilic 3-6 6-1 6-4 in the Citi Open semis. Cilic could not sustain his strong serving in the first set, and Nishikori wore down the Croatian with his speed and pinpoint groundstrokes.

Cilic dominated early from the baseline and broke Nishikori in the second game. The second seed gifted Cilic the break with a double fault and unforced errors.

Cilic had trouble consolidating the break in the next game. He missed a deep Nishikori return into the net at 30-40. The Croatian then double faulted and unsuccessfully challenged the call, but saved a break point when Nishikori missed a backhand pass wide.

Cilic missed a short forehand into the net to give the Japanese player another break chance, but Nishikori missed a backhand wide. A forced error and backhand winner gave Cilic the game and a 3-0 lead.

In the ninth game, Cilic placed two solid second serves down the T to force Nishikori return errors and get to triple set point. After a Cilic miss into the net, the Croat clinched the set 6-3 with an Ace out wide. 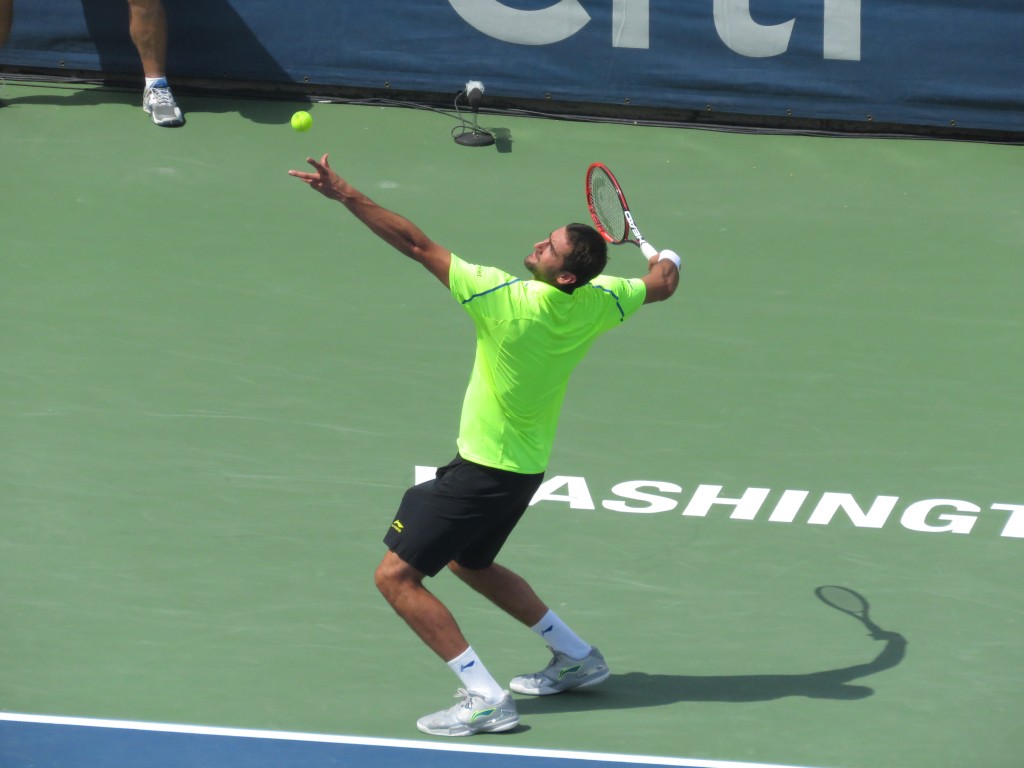 Cilic’s level dropped off considerably in the second set. He was broken twice and his second serves, which were consistently in the 110mph range the first set, dipped to below 100mph. Nishikori served well, and yielded only one point on his first service game of the second set.

Nishikori pressured Cilic’s serve in the second game. A forehand winner and a long rally that ended with an error off the Croat forehand gave Nishikori the early break. 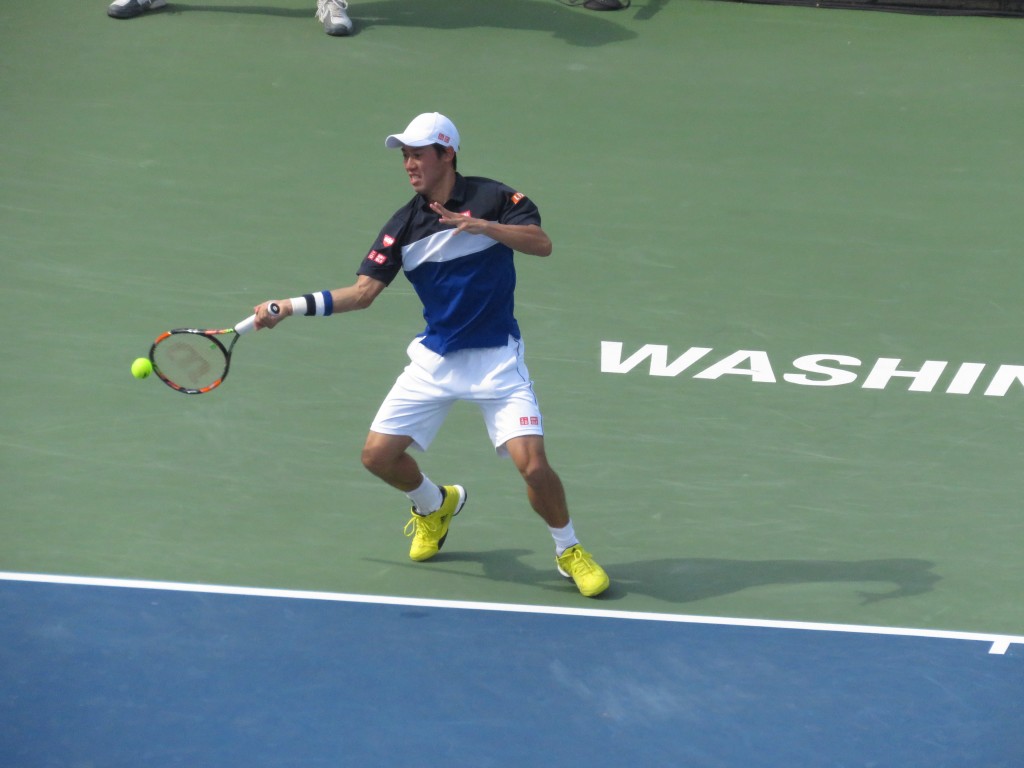 At 30-40 in the next game, Nishikori saved a break point with an ace out wide for deuce. He consolidated the break off a Cilic missed return and unforced error.

At 3-0, Nishikori requested a medical timeout out and the trainer massaged his legs. Cilic double faulted to give Nishikori another opening at 15-30, and he converted the opportunity for a double break 4-0 lead.

Nishikori scrambled for a drop shot, inadvertently hitting it at Cilic’s face for a volley error. He apologized, and perhaps feeling guilty, double faulted to give Cilic a 15-30 opportunity.

The Japanese player was pushed to deuce four times in the game. He missed a routine overhead in the partly windy conditions. However he recovered to win the game on an exquisite down the line backhand. 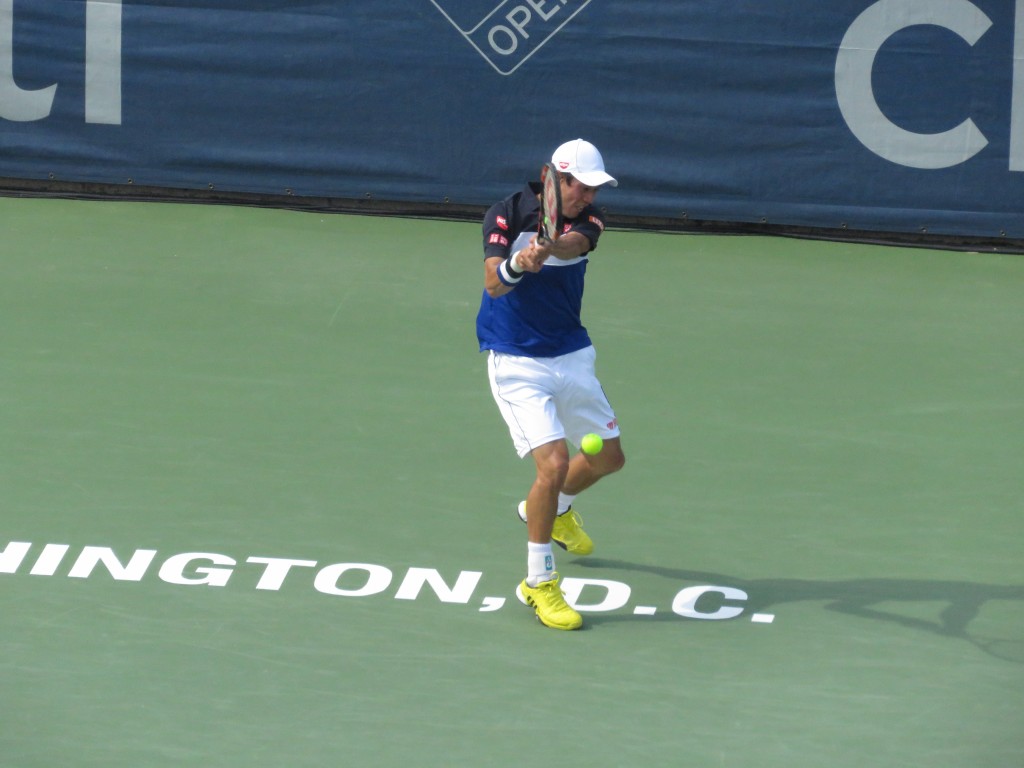 Cilic held in the sixth game of the game, but dropped the set 6-1 off a Nishikori inside-out forehand winner.

After a bathroom break, Nishikori broke immediately in the deciding set off a missed Cilic backhand slice that hit the court before rolling toward the net.

Nishikori saved a break point at 30-40 when Cilic missed a forehand wide. Nishikori then hit a backhand down the line winner to consolidate the break.

The pair traded breaks at 3-4, and at 5-4 15-30 Nishikori, Cilic sprayed another forehand wide for double match point. The Croatian changed his racquets on double match-point, but would only play two more points with new strings.

After missing a forehand, Nishikori clinched the victory on his second match point when Cilic dumped a backhand into the net.

Despite the loss, Cilic was pleased with his performance, saying: “Overall, I’m pretty satisfied with the performance, and definitely it is giving me some vision for the next days and next weeks on what to be focused on.”

Nishikori explained his comeback after the first set: “He was playing well so I let go of the first set and tried to hit more aggressive.  Some of the shots I just have to close my eyes and hit the ball.  I had to change a bit mentally, and there were many ups and downs.  It was a tough three sets, but I showed some good tennis.”