Why UMBC Tennis Will Live on Forever 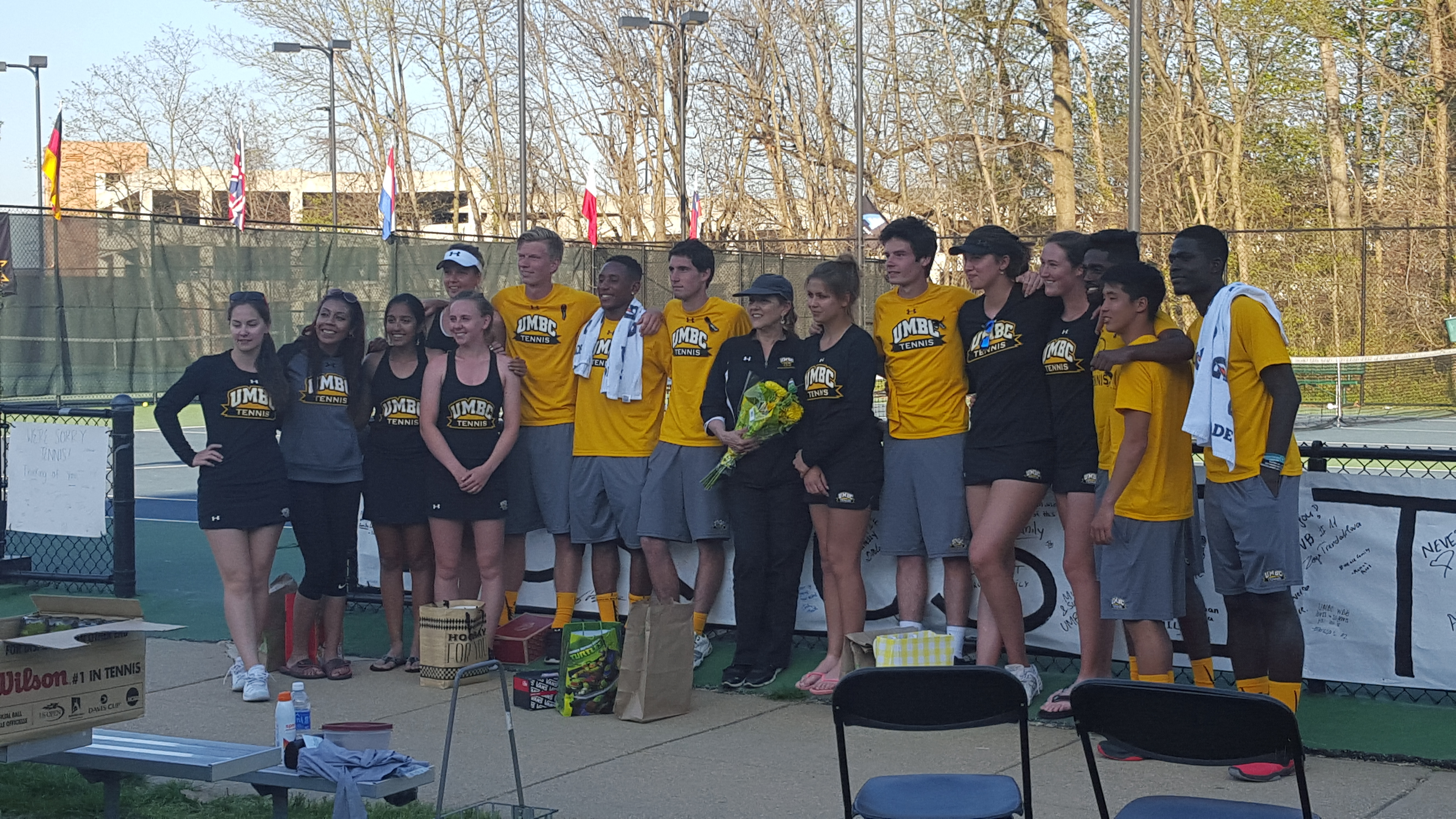 Today I attended an event that I wish never had to happen: the final home match of my college tennis program’s existence. And while I can sit here and rehash why the reasons laid out in this terribly written letter make no sense, I want to take this opportunity to let you know how proud I am of UMBC Tennis and what it stands for.

The very essence of being a UMBC (University of Maryland, Baltimore County) Retriever is true grit.  True Grit is the name of our mascot, after all. If you google the word grit, you will see that it is defined as “courage and resolve; the strength of character.”  No team epitomizes grit more than UMBC Tennis. In addition to finding out that the program would be eliminated after this year, our tennis teams had to endure the passing of our former assistant coach Bobby Hoffman, and volunteer assistant coach Sol Schwartz.

Despite these setbacks, UMBC Tennis came together as a family, and faced the season with courage and resolve to perform to the best of its capabilities. Not only does UMBC Tennis have some serious game, but our tennis teams have the highest GPA of all other sports teams at UMBC.

More than just being great tennis players and high performers in the classroom, I observed the players during the match and chatted with a couple of them. The players at UMBC are some of the friendliest and supportive college tennis players that I have ever seen.  To see players like Junior Biyik Akinshemoyin passionately cheer on his teammates, and observe Senior Justin Carter, a monster of a tennis player, speak with nothing but kindness and respect, made me proud to be a Retriever.

As I listened to the players talk about how tough of a year it has been, and how the team bonded together as a family, I knew that this was the perfect group of student-athletes to represent UMBC Tennis as it closes this chapter of the program. To hear funny stories about French accents, players innocently forgetting their ID before flights, and coach Rob Hubbard and assistant coach Oliver Steil praise their team for its resolve, reminded me of the good old days when I played college tennis at UMBC under Navy Women’s coach Keith Puryear.

The senior gifts were especially thoughtful, often-times hilarious, and reflected the unique personalities of each player that their teammates learned from the invaluable friendships forged during their years in the program.  The gifts included shoes, a sleep mask, and an abundance of muscle milk.  Pretty impressive if you ask me.

The match started at 1pm, and by the time the last Retriever had spoken on Senior Day, after a convincing victory for both teams, it was nearly 6:30.  I slowly walked away from the tennis courts for the last time, but stopped twice to turn around and look at the UMBC Tennis banner, realizing that I’d never have the pleasure of doing so after a UMBC tennis match again.

When I got in my car, I looked at my gold ring that we received for winning the America East Conference tournament and making the NCAA tournament in 2007, and thought about how happy it would make me if UMBC Tennis ended the program with another championship this season.  But I know they will leave everything out on the court, because that is what UMBC Tennis is all about, and that’s the only thing that really matters at the end of the day.

UMBC Tennis will live on forever because of all the amazing people who have been a part of the program. I will always be proud to wear my UMBC tennis gear, and if anyone notices where I went to school and asks me how the team is doing, I will tell them, we are all doing fantastic. I know, because everyone I’ve met who has been a part of the program is successful. And that is a testament to the true grit, the courage and resolve, the strength of character that every one of us developed during our time playing tennis for UMBC.

If anyone ever wondered about the newest generation of the UMBC Tennis family, all you had to do was hear each of the players speak about their admiration and respect for their teammates and our program. The men and women of UMBC Tennis made me extremely proud today, as they always have.

College tennis is not just about the wins and losses, or how much money we may or may not be making for our universities. It is a tool to develop the character of young men and women, to test their resolve, their ability to balance sports and academics, and to teach them the principles of preparation, respect, communication, and teamwork. College tennis is invaluable because it produces successful young men and women who will contribute much more to the world than they would have without the training and discipline learned through the rigors of being on a college tennis team.

The tennis community must understand the true value of college tennis and how disbanding teams robs us of the chance to develop countless groups of fine young men and women who will make our society better.  And we must do everything we can to save college tennis, because our kids and our world deserves better.

As much as it hurts to see the last home match I’ll ever be a part of at UMBC, the saving grace is to know that our tennis program has produced so many wonderful human beings who have and will go on to do great things in their lives.  While I may never see another UMBC Tennis match again, I take solace in knowing that the lasting memories, and the impact that UMBC Tennis has had on our lives, will live with us forever.