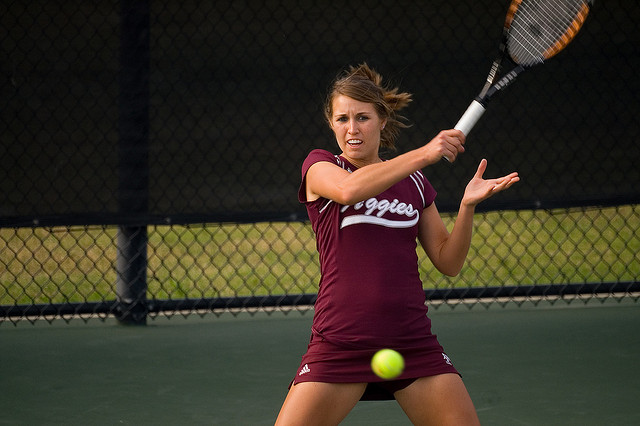 Last week, the NCAA decided to implement no-ad scoring for the 2016 men’s and women’s Tennis Championships.

The decision to shorten collegiate tennis matches will negatively impact student-athletes and the reasoning for the change is flawed.

The Demise of College Tennis

Most student-athletes and tennis fans feel that college tennis has been under attack for decades.

The ITA reported that 204 tennis programs were cut between 2000-2009. This is nearly double the number of tennis teams cut from 1990-1999. An additional 40 programs have been eliminated since 2010. Some of the best, brightest, and most hard-working student athletes have seen their tennis aspirations cut short because tennis has been shortchanged in lieu of bigger sports such as football and basketball.

But the curtailing of college tennis doesn’t end with eliminating tennis programs. In the past few years, the NCAA has proposed a myriad of ways to shorten matches, from replacing third sets with a tiebreak, to cutting doubles from a pro set to one set to six.

Now, the NCAA’s Division I Competition Oversight Committee has approved no-ad scoring for all matches during the men’s and women’s tennis championships starting in 2016. This form of scoring will in all likelihood extend to all regular-season college tennis matches at the Division I level.

There are three important reasons why no-ad scoring has no place in college tennis.

First, the move to no-ad scoring severely alters the outcome of collegiate matches and emphasizes luck over skill. When two players fight their way to deuce, either player must win two points in a row. The deuce-ad-game format ensures that the player who deserves to win a close game is the victor. Now, with the change to no-ad, whoever wins the game becomes more of a crapshoot. A couple big serves or lucky bounces at deuce can determine whether the score of a set is 3-all or 6-0.

Second, no-ad scoring de-emphasizes physical fitness. Physical fitness is paramount to success not just in tennis but in life. College tennis teams, such as the Division I program I played for, practice for 3-4 hours a day and have fitness sessions several times a week. This does not count additional hitting sessions that many dedicated players participate in voluntarily to improve their games.

The NCAA/ITA’s decision communicates to collegiate tennis players that they do not have to worry as much about their fitness. The games will be quicker and the matches will be shorter. If I were playing now, I would be more concerned with developing a huge serve than running wind sprints, because there is no way a match is going to run over X-amount of hours with the no-ad format.

Third, no-ad scoring fails to prepare collegiate tennis players for competition after college, whether it be high-level sectional tournaments, futures events, or higher-level ATP/WTA events. Division I tennis is packed with talented and hungry players who want to continue competing after their four years are up.

How would the no-ad format prepare our highly-skilled collegiate players for future competition if no other tournament utilize no-ad play?

The best way to succeed at something is by performing in the same conditions over and over again. Therefore, the most optimal method to prepare student-athletes for future competition is to play ad-scoring, because that is the format used by virtually all bigger USTA tournaments, futures, and ATP/WTA tournaments.

The NCAA makes several arguments to support their decision for no-ad scoring. Let’s take a look at why none of their reasons merit the change.

First, the NCAA contends that it “made the recommendations to modify the tennis championships with hopes of reducing the length of the championship matches.”

What exactly is the benefit of reducing the championship matches? How does this really help the student-athletes? Collegiate tennis matches are already short enough with the “clinch-clinch” rule, where once a team clinches enough courts to win the doubles point or the match, the remaining matches in play are stopped.

Further, the NCAA/ITA has decided that doubles matches will be one set to six, with a tiebreak at 6-all.  While this move also unnecessarily shortens doubles by a couple games, it highlights the fact that collegiate tennis players aren’t as overworked and in need of rest as the NCAA and ITA may think.

One thing is for sure: shortening matches does help television and cable stations who broadcast tennis matches. We should care about what is best for our student-athletes, not broadcast networks.

Supporters of the move contend that tennis matches need to be shortened. But what about 7-hour college baseball games and 4-hour basketball games? Has the NCAA ever implemented rules to shorten the length of the major college sports? To the contrary: the NCAA has instituted rules to lengthen the “big-money” sports and curtail the smaller ones. Shortening collegiate tennis matches makes it seems like the NCAA wants less tennis and volleyball, and more football, basketball, and baseball.

Second, the NCAA posits that “with the health and well-being of student-athletes, the overall championship experience and fan engagement at the forefront, the ad hoc committee felt that the best direction for collegiate tennis was to move forward with the recommendation”

As noted above, tennis players work extremely hard on their fitness. By shortening the matches, the outcome is drastically changed and the game is increasingly left to chance. The physically superior players who can outlast their opponents are put at a disadvantage. Less of a premium is placed on endurance.

And who is to say that that fans prefer shorter matches? The last time I checked, fans love watching elite athletes battle it out for long periods of time. Division I tennis is the cream of the crop and only the best players and teams participate in the NCAA Championships.

Therefore, wouldn’t fan engagement increase by providing longer matches that are usually close because of the parity of the opponents’ skill level? These types of matches are the most exciting ones.

Using fan engagement as a reason for shortening matches can only suggest one thing: the NCAA/ITA thinks that fans do not enjoy watching tennis matches, and therefore would prefer that matches end quicker. Because if tennis fans truly enjoy college tennis, which is presumably the goal of the NCAA/ITA, then fans would want to see more tennis, not less of it.

Third, the NCAA states that “The ad hoc committee took into consideration feedback from all sides of the debate and was comfortable that this recommendation is in the best interest of the student-athlete experience and well-being.”

The contention that this decision is in the best interest of the student-athletes is tenuous at best.

Take a look at this survey of match format and scoring preferences of student-athletes and coaches based on a survey that ZooTennis published on its website.  The survey shows that a huge majority of student athletes (71.7% of males and 88.2% of females) and a solid majority of female head coaches (72.7%) are against no-ad scoring in the team competition.

Only a slight majority of men’s coaches prefer no-ad scoring.  The same goes for the singles and doubles championships.  It is very clear that student athletes prefer longer matches that adhere to traditional, regular scoring of tennis matches.

Fourth, the NCAA similarly contends that “The goal of the scoring format change is to help improve student-athlete well-being at the ever-increasing high level of competition while maintaining the integrity of the game.  It emphasizes that every point counts and should make our championships matches even more exciting for fans.”

College tennis athletes are fit enough to play a set of doubles and a singles match in one day. This has been the format of college tennis for years, and there have been no major incidences or health-scares at the NCAA tournament that necessitate a move to no-ad scoring.

The contention that no-ad scoring emphasizes every point counts also doesn’t really make much sense.  Does the NCAA suggest that student-athletes don’t take every point seriously? Perhaps no-ad is good “big point training.” But we already have enough big points in the game. Clearly, every point, from deuce to ad-in/out to set and match point, are all extremely important and “count.”

Finally, maintaining the integrity of the game would be keeping the scoring as it has always been, instead of shortening the game to try and get more fans.  By the way, where is the study that shows increased attendance? And even if we do get a few more fans, respect for the game and the student-athlete playing it should come first.

Inexplicably, the majority of the committee was in favor of the rule change. All but one coach, Brian Boland of NCAA Division I champions UVA, supported a change to the scoring of the storied game of tennis. You have got to wonder why such a convincing majority approved of the move.

“I have voted against these absurd changes every single time. It hurts our game, I am fine with the no-ad in doubles, but this hurts us. The college coaches want to skip the hard work to get people engaged. This is not the answer at all. I am beyond disappointed.”

“I went to the College World Series (in Omaha) to support my good friend and neighbor and several of the games lasted over four hours, but I doubt they’re looking to go to six innings. They respect their game and have tremendous leadership. The atmosphere was amazing. The solution is to find a final site that can accommodate the number of teams (at the NCAAs). We have a circus-like atmosphere now and this like swallowing a pill to fix our problems.”

It is also curious that the only member speaking against the decision was not in the U.S. at the time of the decision.  Boland told Zootennis: ” I would have been much more vocal, but I have been overseas.

The NCAA hopes that shortening matches will increase the visibility and popularity of men’s and women’s college tennis. However, this flawed approach shortchanges the student-athletes and fans who want to see high-level tennis played according to the traditional and more equitable scoring rules used in virtually all other levels of competition after college.

Instead, the NCAA needs to focus its efforts on promoting collegiate tennis matches from the ground up and developing a lasting popularity of the sport among the masses. The NCAA should work together with the USTA and ITA to restore tennis to the popularity it enjoyed during the era of John McEnroe, Jimmy Connors, and Chris Evert.

Hopefully the NCAA realizes that no-ad scoring benefits no one and restores regular scoring in collegiate tennis. At this rate, if we keep shortening the length of tennis matches, we won’t have anything left to watch.

TFP 166: The 7 Foundational Movements to Build an Effective Training Program with Justin Russ