How To Hit Effective Approach Shots 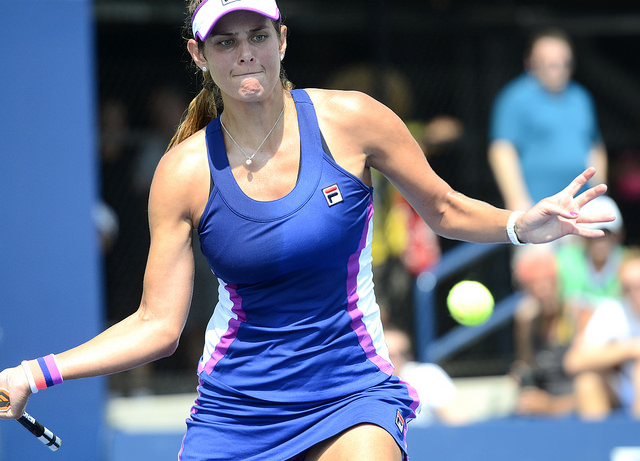 Do you have trouble winning points at the net? Find yourself getting passed or hitting very difficult volleys most of the time?

The key to winning points at net is hitting an effective approach shot.

However, this strategy may cost you valuable points that could be the difference between winning and losing the match.

Your goal when hitting an approach shot is to make it as difficult as possible for your opponent to pass you. And you don't necessarily accomplish this goal by hitting down the line every time.

Instead, you must consider the strengths, weaknesses, and position of both you and your opponent.

Go through each of the criteria below to help you hit effective approach shots that will set up an easy volley (or even better, no volley at all).

1. What is Your Opponent's Weakest Shot?

The number one question you should ask yourself before deciding where to hit the approach shot is this: What is my opponent's weakest shot?

The obvious way to think about this is whether your opponent's forehand or backhand is weaker.  That is a good start.

These are the questions you should ask yourself to maximize your effectiveness on the approach shot.

As touched upon in my article about 6 Tips to Improve Your Tennis Game, use the warm-up and beginning of the match to find out your opponent's weak points.

If you can find a certain shot that your opponent struggles with, apply even more pressure to that shot by making him or her hit it when you approach the net.

Similarly, you should avoid hitting an approach to your opponent's strongest shot.  It makes no sense to direct your approach shot where your opponent has the most confidence he can pass you from.

I firmly believe that making your opponent hit his or her weakest shot to pass you is the number one criteria you should use when deciding where to hit your approach shot.

2. Where Are You and Your Opponent on the Court?

Tennis is like chess: a game of position.  Before you hit your approach shot, recognize (1) your position, and (2) your opponent's position.

Assuming that your opponent does not have a significantly weaker stroke (criteria #1), you should hit your approach shot based on where you and your opponent are on the court.

If your opponent is pushed far wide to one side of the court, your best play usually is to hit into the open court (ideally with the approach spinning away from your opponent). The reason being that a running passing shot is one of the most difficult shots to hit in tennis, especially when stretched far wide.  It requires a lot of speed, balance, and precision which is noticeably absent at the amateur level.  And the potential of you hitting the approach shot for a winner in this situation is obviously at its highest.

If your opponent is in good position to track down your approach shot (i.e. not way off to one side of the court), and does not have a noticeable weakness, then you should usually approach down the line. You don't need to move as far to cover the passing shot off a down the line approach, and you force the opponent to hit an extremely good crosscourt angle or down the line pass.

The ball also has less distance to travel before reaching your opponent (compared to a crosscourt approach), giving the opponent less reaction time before hitting the passing shot.

If you approach crosscourt and the opponent is in good position to get to the ball, you give the opponent a wide open pass down the line and you have to move much quicker to cover that area.

To reiterate: make sure that if you approach down the line, you aren't hitting it to your opponent's major strength (criterion #1). Otherwise, you will have a very low success rate at the net and must change your approach shot tactics.

If you have confidence in a particular shot, and know it is lights out every time, hit that shot when you approach.

For example, you may not have a good down the line backhand, but you have a killer crosscourt backhand.  Or you may have a wicked forehand slice approach that you can practically make with your eyes closed.

It is much better to come to net off a shot that you are confident hitting than a shot that you are unsure you can execute successfully, because you are more likely to make the approach and hit it strongly.  The result: a tougher passing shot for your opponent.

Being comfortable hitting your approach shot will lead to a more comfortable experience at the net.

4. How Quick Is Your Opponent?

Analyze the speed of your opponent. Most quick players start sprinting toward the open court the moment you hit the approach shot.  As a result, I like to hit behind quick opponents, which usually results in a winner or weak reply.

Quick opponents usually excel at hitting great shots while on the run. By hitting behind this type of opponent, you take away the opponent's strength.  The opponent also has to stop all of his or her momentum, which is very difficult and time-consuming.

The hit-behind tactic will cause your opponent to second guess where you are going to hit your next approach shot, and then you can hit the next one crosscourt while your confused opponent is forced to guess where the ball is going.

Obviously, if the ball floats to you and the court is wide-open for a winner, by all means hit the approach shot in the open court. Likewise, if your opponent is slow or has a weak running forehand or backhand, hit to the open court.

Otherwise, try hitting behind a quick opponent to increase your success at the net.

If you haven't found an approach shot that works for you, try changing it up.  Hit heavy topspin, slice, hit it at your opponent, short, deep, and behind him or her, and see what works best.

For example, low and short approaches can work well because you force the opponent to move both laterally and forward to hit a low ball.

By varying your shots, your opponent does not know where you are going to hit the ball and has to guess.

Pretend that you are a soccer player going for a penalty kick. The goal is to kick the ball where (a) the goalie does not expect it to go, or (b) to the goalie's weaker side (i.e. he has more trouble defending his right side than his left side).

Practice the on-the-rise approach shot: it takes a lot of focus and great timing (keep your eye on the ball!).  If you can master this shot, you will have even more success at making your opponent hit a very difficult passing shot off your approach.

Ultimately, I want you to choose where to hit your approach shots based on a totality of the circumstances: the strengths, weaknesses, and position of both you and your opponent.

Don't just hit your approach shot down the line every time.  Use the criteria above to hit the optimal approach shot and make life at net as easy as possible.

Let me know what you think!  And if you like this article, please SUBSCRIBE to my newsletter for even more tips and strategies to improve your tennis game. Take care everyone!