How to Beat a Pusher: 5 Surefire Tactics 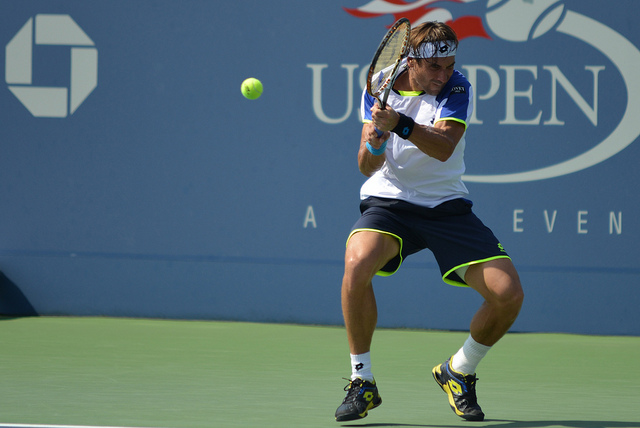 I would like to establish that I have all the respect in the world for pushers.  While they tend to lack firepower, or may have ugly strokes, they often persevere through sheer willpower and an I will not miss a ball attitude. That's a tough player to beat.

So let me put it to you this way.  The pusher is the guy with plastic wrap as his shield.  If all you have are small pebbles to throw at the shield, then the pebbles will not penetrate his defense. However, if you use bigger stones or rocks, then the plastic wrap shield will be destroyed.  And if you don't have these stronger weapons, you can throw your pebbles at a closer distance to give your shots more effect, and less time for your opponent to raise his shield.

What does all this mean?  The best ways to beat a pusher are to develop a consistent weapon and get to the net!!!

The pusher is tough to play against if you don't have the right tools to implement the proper strategy.  Sure, he seems like he can get every ball back.  But that's probably because your groundstrokes move slower than rush-hour traffic.

Here are my 5 surefire tactics to beating a pusher.

Pick a stroke.  Any one you want.  And make a weapon out of it!  A big serve.  A huge forehand.  A down the line backhand.  You always hear someone complaining that he can't beat a pusher.  Look, I can complain that I can't fix my toilet (this is accurate).  But if all I have in the toolbox is a screwdriver and a wooden hammer, how could I do the job?

Instead of complaining, you need to develop a consistent weapon.  This will be the main tool that defeats the pusher.  The cannon ball that barrels through the pusher's defense. When I play a pusher, I push (pun intended) the opponent around the court with my forehand, and at the sight of a short ball, I pummel it into a corner.

I will also often hit behind a pusher, because pushers are usually fast and will start running to the other side of the court, thinking the ball will be hit where they aren't (gotcha!).

The superior velocity, spin, and placement of my forehand makes it a weapon. However, in the event that you can't finish points from the baseline, you might want to.....

2. Work on your Volleys

Some pushers are not going to let you hit winners.  These advanced humanoids protect the baseline like it was their last meal or their life savings.  Or perhaps you aren't at the stage (yet!) where you can blast serves like Milos Raonic (watch out, audience!) or hit massive groundstrokes winners.  Then you must either get to the net or tap out after a couple consecutive hundred-ball rallies against your pusher opponent.

You need to develop a good first volley that forces the pusher to hit a passing shot from an uncomfortable position.  What you can't do is pop up or float your volley, or you set up an easy passing shot against you.  Once you get the pusher on the run, look to close into the net for a second volley that you can hopefully put away.

Remember, tennis is more like a chess match than arm-wrestling.  You don't have to go for a first volley winner.  Set up the point and close the net.  If the pusher opts to lob you, then you need to......

Especially at the lower levels, the pusher will resort to the lob.  If you are at the net and the pusher lobs you, having a good overhead is all the difference between winning the point or chucking your racquet over the fence after you smashed the first 5 overheads in the net and long, and shanked the sixth one next to the 7-11 across the street.

The most important thing for overheads is footwork.  You must quickly get into position: first with a split step and sideways turn, then sidesteps to the ball, and finally with small fast steps right until you get under the ball.  If you do not get into position, then you cannot leverage your weight properly and will be stuck hitting an awkward, weak shot.

While the footwork is paramount, as soon as you turn sideways, you must bring your racquet arm up, and non-hitting arm up to track the ball. Focus your eyes on the ball, point your left hand at the ball, load by bending your knees, and then uncoil into the ball. It's just like the serve except with movement, and you generally want an abbreviated take back for the overhead rather than a full backswing.

Remember, you don't always have to go for the flat boomer; use some spin and place your overhead where the pusher isn't (or hit it straight at him if you're angry....nevermind, not classy).  Otherwise, to beat a pusher you're going to have to....

4. Work on your Fitness

Fitness is everything in tennis.  There is no game clock.  A tennis match would go on forever if no one could string together two measly points in a row.  And if you play a pusher, naturally you would have a longer match than against Johnny-2-Shots-and-I-go-for-a-Winner-on-the III (Johnny only I II matches last year!).

If you get tired, then your footwork intensity lessens, your technique can break down, and you lose the power and placement that you had earlier in the match.  I've seen many-a-pusher beat technically sound players because the latter got tired, or the pusher just plain wanted to win more than his opponent (unacceptable!).

In any case, do some on-court conditioning and your body and win-column can thank me later.  My two favorite conditioning drills are suicides (do that for a court or three; you might want to bring a trash can to puke in after a few of these), and the spider drill (place a ball on each intersecting line, begin by bringing each ball to the serve hash, and then put each ball back where they were to begin with).  Check out my free tennis fitness workout guide for sample workout plans to improve your tennis game!

I once told my tennis coach that the spider drill was too easy, so he made me do 2 in a row in front of the other players in junior camp.  I then proceeded to lay on a bench and experience that dizzy feeling you get when you bang your head into an invisible wall. Improving your fitness will help you to.......

5. Be Confident that you WILL Defeat the Pusher

Don't psyche yourself out with such phases as "this guy gets back everything", "i hate playing pushers", and "what time is Family Guy on tonight".  Ok, I know we aren't playing the "which one of these does not belong" game, but keep yourself on track here!

As long as you have diligently practiced developing a consistent weapon, sharpened your volleys and overheads, and improved your fitness, you are in prime position to beat the pants off your pusher opponent.  "Practice breeds proficiency which in turn fosters confidence" (Jay-Z.......just kidding, that's my quote).

You will believe in yourself and your ability to use the tools you have developed to blast through the plastic shield.

I hope that you follow my advice on how to beat a pusher.  These surefire tactics will have you dominating not just pushers, but most of your opponents, for years to come. Have fun crushing the competition, my friends.

Do you have any other winning strategies to defeat pushers?  Comment below!

TFP 245: [Tennis Summit 2022 Preview] – How to Level Up Your Mental Game, Strategy and Equipment with Macci, Annacone and Iverson