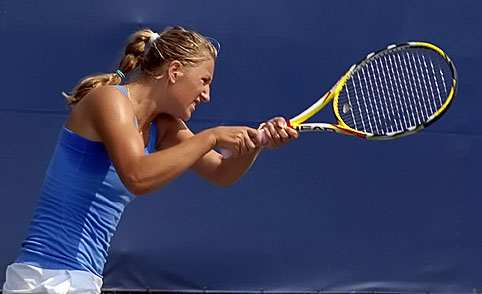 As a tennis player, I take an immense amount of pride in the sport.  Unfortunately, there are people who disrespect the game out of plain ignorance or sheer stupidity.  The following is a list of tennis pet peeves that everyone should be aware of and take steps to correct:

Tennis Pet Peeve #1: Playing another sport on a tennis court

There is nothing more irritating than seeing a group of people kicking a soccer ball or playing lacrosse on a tennis court.  First of all, there is a reason why we have tennis courts: we can’t play tennis anywhere else.

You can go on any of the thousands of nearby fields or grassy areas and play baseball, soccer, lacrosse, or other sports.  Instead, by playing another sport on a tennis court, you are taking up one of the few courts available that are sought after by tennis players.

I see people ride their bikes (incredible) on tennis courts, which often leave black streak marks.  I have also seen lacrosse clinics held on tennis courts (seriously???).  Here’s an idea: why not practice on the same surface that you compete on? If you’re going to compete on a grassy field or on dirt for your sport, do us and yourself a favor; practice on it and leave the tennis courts for us.

Certainly, we can all admire your will and sheer desire to win.  But by cheating, you are not only robbing a person who rightfully earned a point, game, set, or match, but you also show everyone that you lack integrity.

The downfall of most empires: cheating the people.  The downfall of marriages: cheating on your spouse. The reason that many kids get expelled from school: cheating on tests. You get the point (hopefully not because you cheated!).  When you form a habit, it becomes ingrained in your character.  And above all, it is really annoying and immoral to cheat.

If you see the ball hit any part of the line, it is IN.  By sticking to this simple yet often violated rule, you present yourself to the world as not only an honest and trustworthy tennis player, but also an honest and trustworthy person.  You don’t want to be referred to as “the cheater.”  It doesn’t do much good for your rep.  Cheating is undoubtedly one of my greatest tennis pet peeves.

Regardless, throwing your racquet is a big mistake for many reasons.

(1) Racquets are expensive.  Playing tennis costs a lot of money (alright, the 1% can stop laughing now). Throwing a racquet, especially at certain angles, can crack a frame, leaving the racquet useless except to ward off house burglars and drunk people at tennis socials.  Racquet companies are not going to replace a racquet that has been voluntarily cracked (there is no crime of passion defense here).  Just because the pros throw their racquets doesn’t mean you should.

(2) Throwing your racquet can get you a code or point violation.  If you are playing in a tennis tournament and a referee sees you throw a racquet or smash it on the ground, you will get a point penalty or code violation.  If you accumulate enough point penalties, you can be defaulted from a match, or worse, banned from play competitively for a while.

(3) Abusing your racquet makes you look like a cry baby.  Yes, image is everything. And no, I am not trying to sell you a canon rebel from 1990.  What kind of grown man or woman needs to slam a 12 ounce piece of titanium to the ground to feel better?  Not you, that’s who.  Give meditation or breathing techniques a try if you have issues controlling your anger.

It is one thing if you naturally expel air while hitting tennis balls, or the noises you make are a direct result of you working your tail off to get to a ball.  However, it is another thing when a tennis player shrieks like a hyena seconds after hitting a tennis ball. The latter is a well-known tennis pet peeve.  Personally, I am at my best when I expel air or grunt naturally when I hit a tennis ball.  However, I have heard shrieks that are surpassed only by the highest decibel levels often found at construction sites.  And I don’t think that type of grunting is necessary.

Grunting seems to put off a large number of tennis fans who come to watch tennis for its beauty and elegance, not to listen to shrieks and screams that would be better suited for the demise of a protagonist in a horror film.

If grunting helps your tennis game, and is a natural byproduct of your effort, then by all means go for it and grunt.  And if you are a loud grunter, but know in your heart that grunting allows you to play your best game, then I can’t blame you for your ear-busting habit.  But you won’t be the most popular chip off the old block for doing it.

Tennis Pet Peeve #5: Not Calling Out the Score

While this pet peeve is forgivable, this one still makes the list for a couple reasons.

(1) The audience won’t know the score.  For those of you who have supporters in the crowd, it keeps them in the dark.  Not everyone trained under the tutelage of Ms. Cleo in predicting the future.  If you call out the score (or update the scorecards) then people will follow and be more engaged in your match.

Otherwise, people spend half the time spreading rumors about what they think the score could be based on the last two points you just lost and the death stare you gave your opponent, even if they were the only two points you lost in the last hour (what a perfectionist!).

(2) It opens the door to cheating and/or forgetting the score.  We’re not robots, so we may forget the score if we do not call it out loud each time.  A savvy opponent may pick up on this and try to weasel the score in his favor.

(3) It slows down the match.  If the score is called out every point, as it should be, then there won’t be a need to recount past points in an effort to remember whether the score is 40-15 or 30-30.

That’s all I have for now.  I’m sure I’ll think of additional tennis pet peeves after playing some more tournaments in a couple months.

Let me know your biggest tennis pet peeves: comment below!

TFP 162: The Best Tennis Racquets for Your Game with Jean-Pierre Jounier