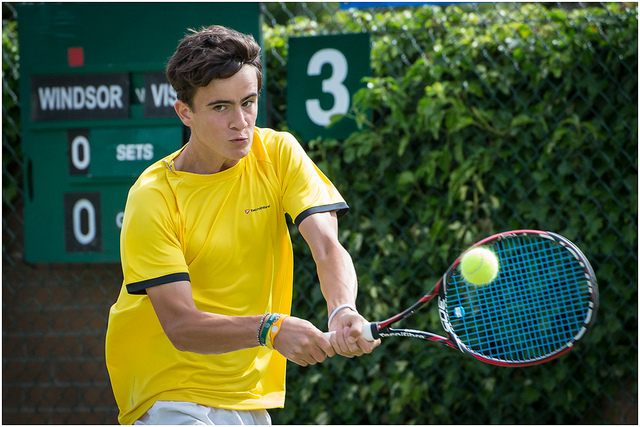 When we change our technique, the goal is simple: to become proficient at it as quickly as possible.  Yet many of us sabotage our progress by practicing technique in an environment which prevents us from focusing on the technique alone.

We must understand that the type of environment in which we practice a skill dictates how long it will take to successfully learn that skill.

Players and coaches must acknowledge what stage the player is at in the  development process and adjust the learning environment accordingly.

Let's take a look at how you can learn tennis skills more efficiently by understanding the key accelerated learning principles from one of the most proficient skill learners in the world, Tim Ferriss, and then applying those principles to tennis.

Optimize Your Environment For Learning

Tim Ferriss, author of The 4-Hour Work Week, The 4-Hour Chef, and The 4 Hour Body, has made a living out of rapidly learning new skills at a very high level and

telling his audience how he does it.  In The 4-Hour Chef, Tim examined his first attempt and failure at cooking, figured out why, and explained how to cook meals efficiently and effectively through accelerated learning principles.

Tim had a hard time cooking in the beginning because of a couple reasons. First, he focused on learning too many skills in one session.  Tim tried to learn all the different phases of cooking a meal at once, including how to purchase meal ingredients, prepare them, cook the meal, and clean-up after cooking. Naturally, learning all these skills at the same time was too overwhelming.

Second, Tim found that learning skills in pressure-filled environments was too difficult. How could he focus on learning how to flip an egg properly when people were counting on him to make them breakfast?

Once Tim realized these problems, he adopted 2 key principles:

(2) Remove all elements that add pressure to your environment.

Using these principles, Tim learned how to cook quickly and efficiently.  When Tim learns a particular skill, he eliminates all variables that add pressure to his environment so that he can focus solely on becoming proficient at that skill.

For example, Tim trained his archery skills by playing archery tag, which is essentially laser tag with bows and arrows (this sounds pretty awesome!). Archery tag allowed Tim to refine his archery technique in a relaxed environment without the pressure of needing to hit a bullseye.

Now let's apply the accelerated learning principles above to tennis.

When you first learn new tennis technique, you should remove all extraneous variables so you can concentrate exclusively on your mechanics. You must focus all of your energy on ingraining a new and unfamiliar technical pattern into your muscle memory through thousands of correctly executed repetitions.

For example, if you are just beginning to change your backhand technique, you would not want to do this while playing a match, set, competitive point, or even during a practice rally.  If you have the added pressure of having to account for a moving ball and trying to win a point or match, it will be extremely difficult for you to consistently execute the new technique properly.

Resist the Urge to Compete Until You Are Ready

Often times, players who attempt to make a technical fix in their game start competing too early. Unfortunately, the pressures of winning will always overcome the discipline required to make a technical change. Accordingly, the player will revert to his or her old way of hitting the ball in order to win the match, and prior efforts to train the muscles on the new swing pattern are wasted.

This is a major mistake that I have mentioned before and explored further on my podcast with Tomaz Mencinger of feeltennis.net.

Most people think that once the player stops playing tournaments, all competitive pressures are removed and they have created the optimal environment for learning new tennis technique. Unfortunately, they are wrong.

Even the difficulty of having to hit a moving ball will hinder the development of a new or modified technique in the beginning phase.  The player's brain will overload: he or she will not only have to concentrate on a new technique, but must also think about the actions of the opponent, calculate where the ball will land, and determine where to hit the ball.

Many coaches start developing a player's technique through racquet-fed balls or live-ball rallies when they should utilize an even more basic teaching method which simplifies and accelerates the learning process: the hand-fed ball.

The hand-fed ball is the easiest way to practice new technique because the player does not have to think about making adjustments for an incoming ball or winning the point.  As a result, the player can strictly focus on the technical change.

During lessons, my students have had far more success following my instructions and hitting the ball properly when i dropped it in front of them by hand.

Many times, my players failed to make solid contact with a racquet-fed ball (not because of flawed instructions, I assure you 🙂 ). But once I walked over to them and hand-fed the ball, they had a remarkably easier time focusing on my instructions, hitting a cleaner ball, and eventually gained the confidence and skill required to start hitting a moving ball. I also learn technique more quickly and comfortably through hand-fed balls.

For your serve, allocate time to practice it alone or with your coach. You will have a very hard time learning new serve technique if you try to use it in competitive practice points or matches without first practicing that technique by yourself until it becomes second-nature. Having an opponent ready to receive your serve on the other side of the net will bring unnecessary pressure when learning new serve technique.

Practicing Technique with a Hitting Partner

If you have a basket of balls, you can ask your partner to hand-feed you balls and exchange the favor. But this may not be a practical option.  In these cases, we should do everything we can to minimize the pressures in our learning environment when practicing with another player.

A more practical way to practice your technique with a hitting partner is to rally down the middle of the court. Hitting down the middle of the court minimizes the movement required to get to the ball and the urge to win the point.  It lets both players work on their technique and get into a rhythm. This is the most practical way of working on your technique with a partner and is the method Tomaz used to refine his technique.

If you can't hit down the middle the entire time, choose drills over point play. And if for any reason you must play points or sets, you should avoid hitting the stroke for which you have started a technical change, unless hitting hand-fed balls with that stroke has become second-nature. Once you are put into a pressure situation, you will revert to your old technique to win the point and hinder your technical development.

The brain, as Tomaz cleverly puts it, is like a computer.  If the computer overloads, it will function slower and sub-optimally.  If you can set up a learning environment which minimizes the presence of other variables, you can focus on what matters most: your tennis technique.

Once the new technique becomes more familiar and automatic for the player in hand-fed situations, the player should progress to hitting moving balls and point play.  The player must ensure that he or she can utilize the stroke in live ball situations. If the player has trouble taking the next step, then he or she should hit several hand or racquet-fed balls before playing points.

With the player proficiently executing the improved technique in competitive point situations, the player can now use the stroke in practice sets, and then eventually move on to tournament play.

The key is for the player to be able to execute the stroke without thinking, so that it is second nature.  If the player finds that he or she has to think about how to swing the racquet during competitive play, the player and coach should take a step back and practice the stroke in a non-competitive environment as described above.

Many tennis players hinder their technical development by leaping into competitive play too quickly.  Players should start learning technique with hand-fed balls and gradually progress to moving balls and point play once the player can execute the new technique in each of these environments without having to think twice about it.

Let me know what you think about the optimal environment for learning tennis technique by commenting below!