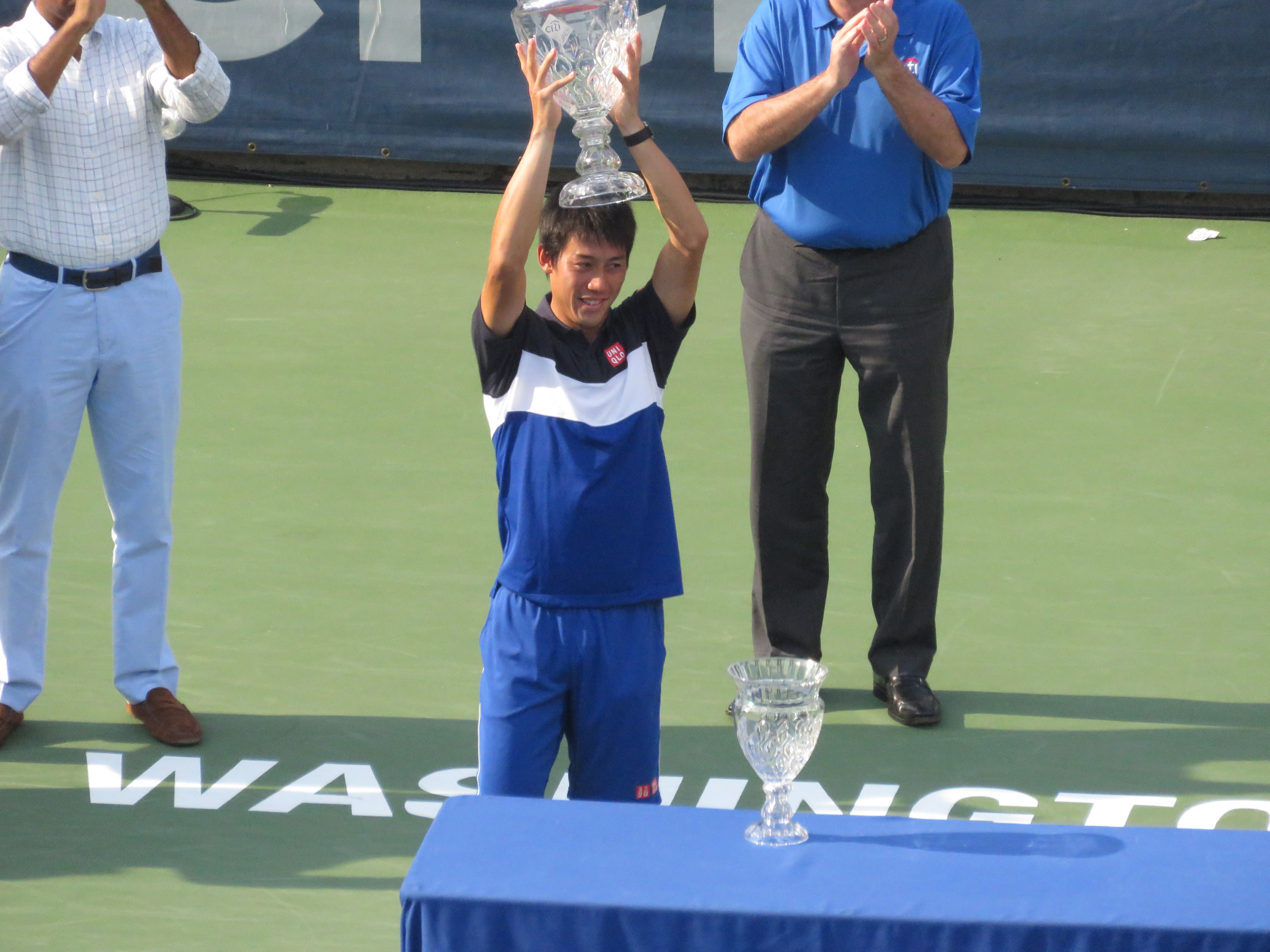 Washington DC (Tennisfiles) – Kei Nishikori, the first player from Japan to reach a Citi Open final, defeated American John Isner 4-6 6-4 6-4. Playing in his third three-set match of the tournament, Nishikori’s agility and superior ground game was the difference against the powerful American. The Japanese superstar won his 3rd title of the year and 10th of his career in 20 finals.

Isner looked to shorten points with quick serve-groundstroke combinations against the speedy Nishikori. At one-all 40-15, Isner held with a slice serve out wide which he followed up with a forehand winner to the opposite corner.

The American pushed Nishikori’s serve at 2-1, nearly breaking Japan’s number one player. Serving at 30-40, Nishikori saved the break point and won the game after twice forcing errors from Isner by stretching him wide to the forehand.

Nishikori earned a break point of his own in the following game with a short-angled crosscourt backhand winner, but did not convert the opportunity. The second-seed could not control Isner’s kick serve to the backhand, but the American missed a sitting forehand volley into the net on the next point. Despite the error, Isner closed out his service game with three unreturnable serves, including a 132mph heater down the T. 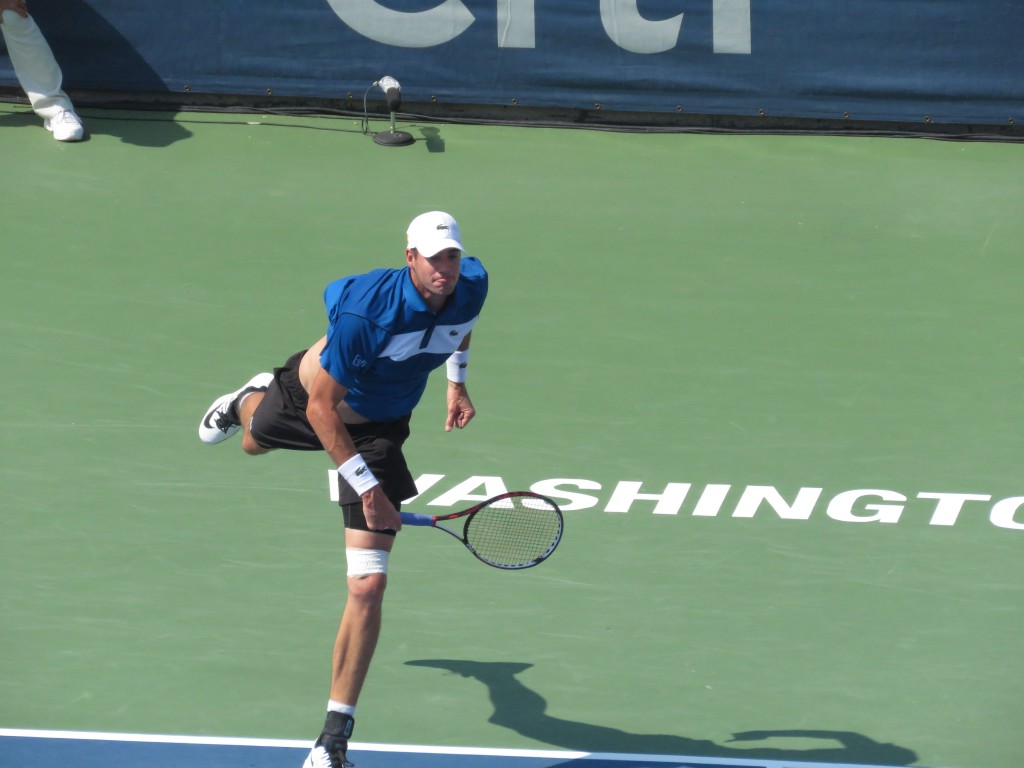 With Nishikori serving at 4-5, Isner broke the world’s #5 player with a pair of clutch returns. The American hit an inside-out forehand winner off a second serve, and followed it by cracking a forehand winner down the line off a Nishikori first-serve out wide to take the first set 6-4.

Nishikori responded quickly, breaking Isner in the first game of the second set to seize the momentum. The Japanese star cracked a crosscourt forehand winner and a return that Isner hit into the net for 0-30. Isner battled back to 30-all with soft hands on a half-volley drop shot winner and an unreturnable serve. An extended rally resulted in an Isner backhand error for break point, but the American leveled the game with another ace down the T.

At deuce, Nishikori whacked a forehand return to Isner’s feet, and this time Isner could not handle the half-volley. Isner hit an unreturnable serve, but Nishikori successfully challenged the call, forcing a second serve from Isner.

Nishikori’s challenge proved fruitful: on perhaps the most pivotal point of the match, Nishikori broke serve when Isner barely missed an inside forehand just long. Isner unsuccessfully challenged the call.

Nishikori consolidated the break to go up 2-0, sealing the game with pinpoint groundstrokes and sneak attacks into the net to finish points. Isner held the following game.

At 1-2, 15-30, Nishikori hit a kick serve that Isner misfired outside the lines. The eighth seed then missed a backhand and running forehand to give Nishikori the game.

Serving for the set, Nishikori struck an 88mph second serve ace out wide. At 30-0, Nishikori double faulted and hit a backhand wide to let Isner back in the game. However, Isner faltered, missing a down the line forehand into the net to give the Japanese megastar set point.

Isner jumped on Nishikori’s second serve, cracking a backhand crosscourt that Nishikori could not put back in the court. Nishikori worked the ball into Isner’s backhand corner on the next point and approached the net for an easy volley. Nishikori sealed the set with a forehand that Isner hit wide on a full stretch. 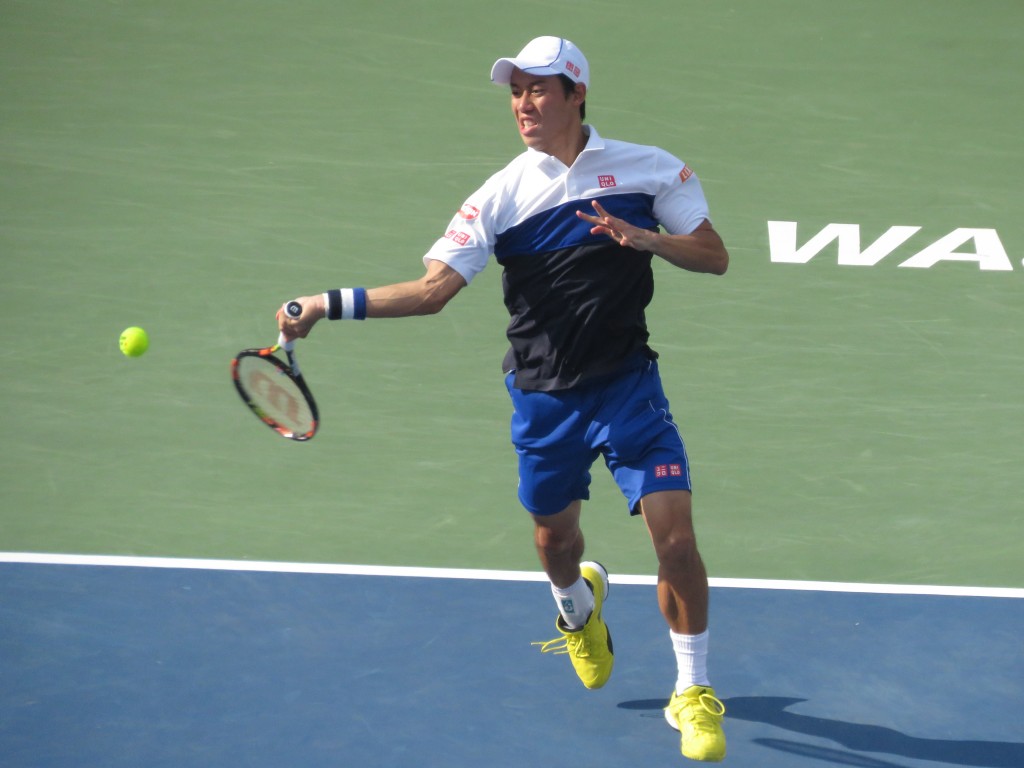 Nishikori began his service campaign to perfection in the deciding set. At 30-all 0-1, Nishikori hit a beautiful slice serve, backhand winner combination, and clinched the game off an Isner backhand error.

Nishikori broke Isner at 1-1 and Isner never saw the lead again. In the third game, Nishikori showed amazing balance by controlling a backhand down the line winner off a powerful Isner approach shot. Isner responded with an ace out wide for 15-15. Isner then hits a slice just long for 15-30. Nishikori worked the game to 30-40, and then broke Isner when the American cracked a forehand into the net.

Nishikori continued his dominance from the baseline, hitting winners from both wings, and forced Isner to attempt difficult shots from uncomfortable positions on the court to hold for 5-3. Isner then held at love to force Nishikori to serve out the match.

Nishikori hit a down the line backhand which the replay showed barely scraped the baseline for a winner. Isner then struck an unreturnable backhand that was challenged successfully by Nishikori to get to triple-match point. Nishikori hit blistering groundstrokes to the corners, approaching the net for a backhand volley winner off Isner’s outstretched floating forehand passing shot to end the match. With that, the Japanese ace won his 86th and final point of the contest and the 2015 Citi Open championship title. 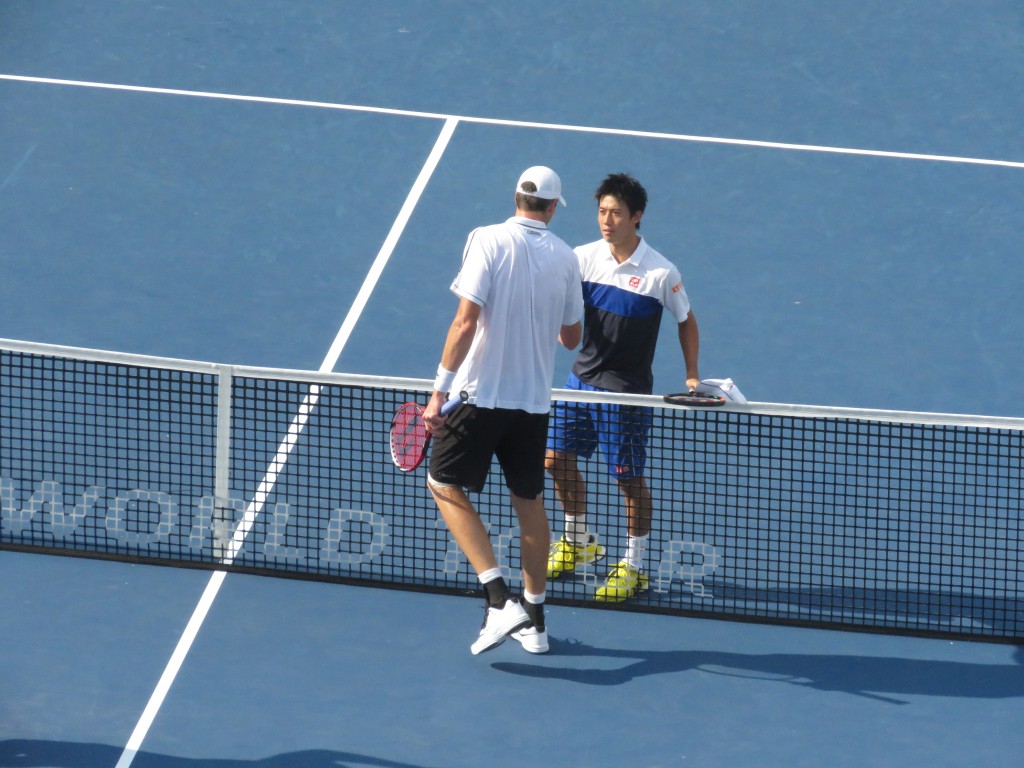 Isner was gracious in defeat, telling the media: “He’s arguably the best in the world on the baseline.  He is a great player and a great champion. He’s blessed with a lot of talent when it comes to that but he also works his tail off too. If you combine those things, its a recipe for some good tennis.”

Nishikori reflected on his play: “I tried to be a little more aggressive than before. In Miami I was just playing the ball and waiting for his mistakes.  I think it was a great match for the two of us.”

With the win, the Japanese tennis pro moves up one spot to #4 in the world rankings.

Earlier, the Bryan brothers defeated 2015 French Open champions Ivan Dodig of Croatia and Brazilian Marcelo Melo 6-4 6-2. The Americans avenged their loss to Dodig/Melo on the red clay with stellar returning and dominating net presence. Dodig/Melo were broken early in the first set and twice in the second.

After the match, Dodig and Melo spoke with Mehrban from Tennisfiles about their performance and career plans after the pro tour:

American Sloane Stephens won her first title, defeating Russian Anastasia Pavlyuchenkova 6-1 6-2. She described her feelings about her first WTA tour title, saying: “It was just nice that all the hard work and everything that I put into it, now I can say that I have a tournament title. Everything happens when its supposed to happen. It’s something I’ll always have to look back on. I’m really happy that I did it here because this is one of my favorite places to play and the support here is always unbelievable so I’m really pleased with that.”