Australian tennis pro and world #16 Nick Kyrgios led the Washington Kastles to victory over the Orange County Breakers in the team’s final World Team Tennis match of the season on Saturday. Kyrgios impressed the DC crowd with his raw talent and shot-making ability, and clinched the win for the Kastles in overtime.

Before the match, Kyrgios expressed his excitement for playing World Team Tennis with the Kastles during his press conference:

“I really love the team environment. I’ve never player WTT before but I’ve played another format of it. I love how your teammates sit on the bench. As soon as I got the call I wasn’t going to think about it. I was going to take the opportunity. I really enjoy it and I’m looking forward to tonight.”

Another bonus for Kyrgios was fellow Aussie and Kastles team member Sam Groth. The top Australian pro has played with Groth for their country’s Davis Cup team.

Kyrgios stormed up the rankings since he turned pro in 2013, and I asked him what the key has been to his success. The Aussie showed why he is one of the most entertaining players on tour with his response:

“I don’t have a coach or a physical trainer so maybe that’s the key. I’m just trying to enjoy my tennis and my life. I don’t really know. I can’t say I’ve been training a lot. I’ve just been going with the flow.”

Kyrgios and Andreja Klepac kicked off the match with a 5-3 win over Scott Lipsky and Alla Kudryavtseva. Klepac, who usually plays with 2016 Wimbledon semifinalist and recent The Tennis Files Podcast guest Treat Huey, started off strong with Kyrgios. The DC pair broke Lipsky and Kudryavtseva in the first game and held serve for a 2-0 lead. Although the Breakers tied the match up at 2-2, the Kastles broke Kudryatseva to clinch the set after three service consecutive holds. 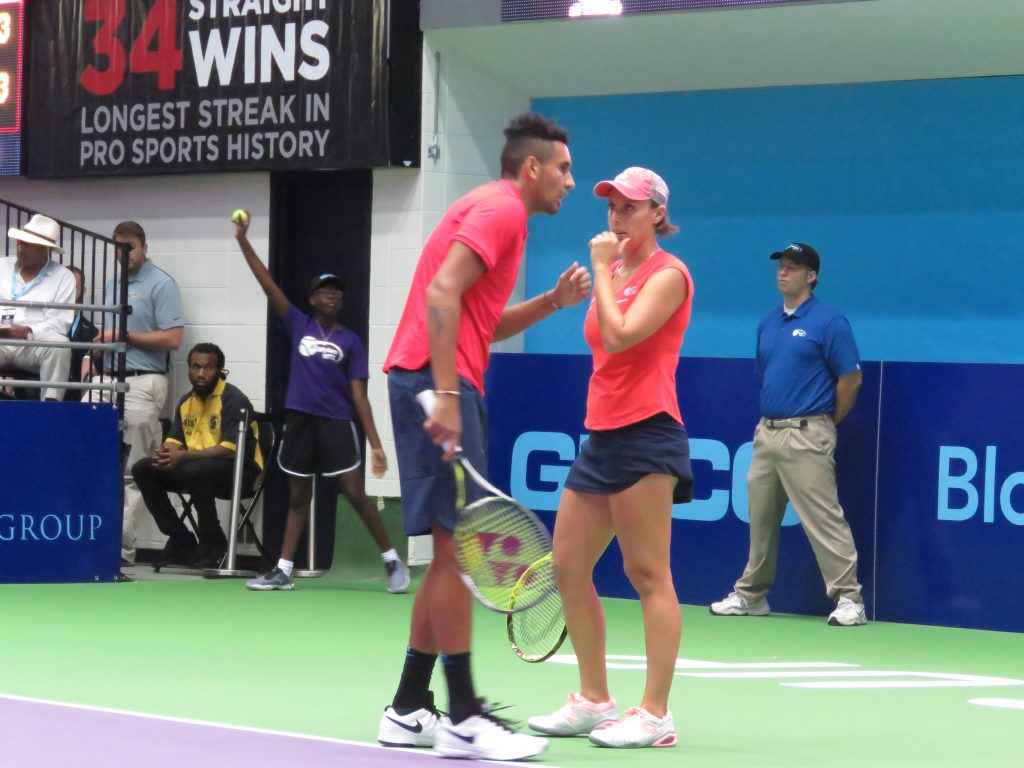 In the women’s singles match, a feisty Madison Brengle defeated Nicole Gibbs. The 49th ranked WTA pro from Delaware took a page from the mixed doubles match and raced to a 2-0 lead. From there, Brengle held her service games and won the set 5-3. Brengle used her consistency and speed to outlast Gibbs, who piled on a few too many errors earlier in the contest. 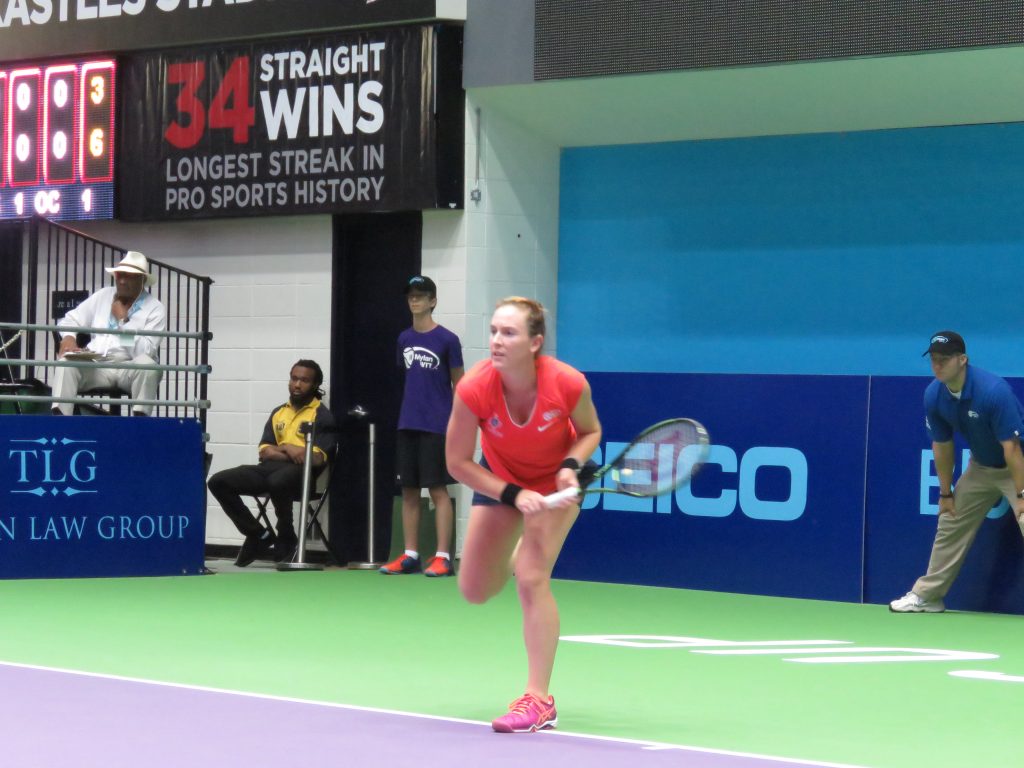 Kyrgios and big-serving Sam Groth teamed up for an exciting 5-4 victory in the men’s doubles match against Lipsky and Dennis Novikov. Neither team was able to break serve, and at 4-4, the set hinged on a tiebreaker (first to 5 points, win by 2). The Australian pair clinched the set with stellar play despite going down a mini-break in the middle of the tiebreaker. Kyrgios and Groth showed their world class play with down the line passes, pinpoint serves, and cross-court drop volleys. 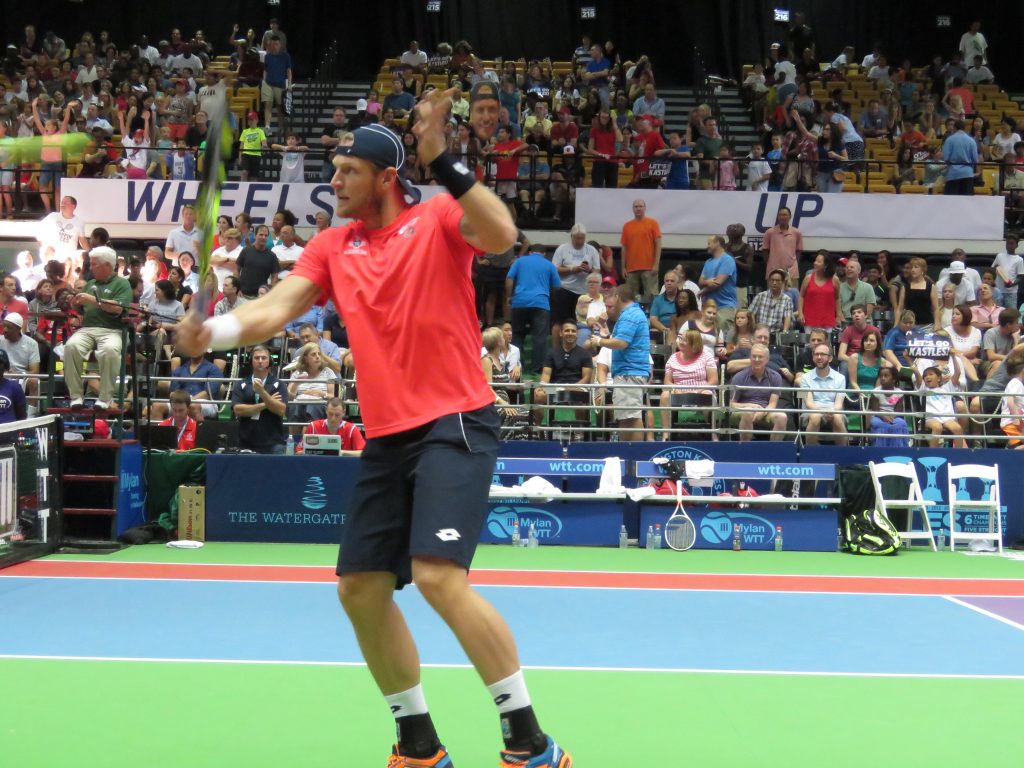 In the women’s doubles match, Klepac and Brengle defeated Gibbs and Kudryavtseva 5-3. Once again, the Kastles broke early, this time twice, for a 3-0 lead. Both teams then exchanged breaks of serve before the Breakers staged a mini-comeback to get back to 4-3. However, Klepac held her nerve and served out the set.

Had an awesome time at the @washkastles #mctef player's party! #madisonbrengle and @aklepac13 rocked it last night! You are both welcome on The Tennis Files Podcast anytime! 🙂 @mcta_tennis #tennis #wtt

In the marquee event of the evening, Dennis Novikov defeated Kyrgios 5-4, but the Australian clinched the match against the Russian-born American in overtime.  After both men held serve to get to 4-3 Kastles, Kyrgios held two match points against Novikov but was unable to convert against the #120-ranked American. 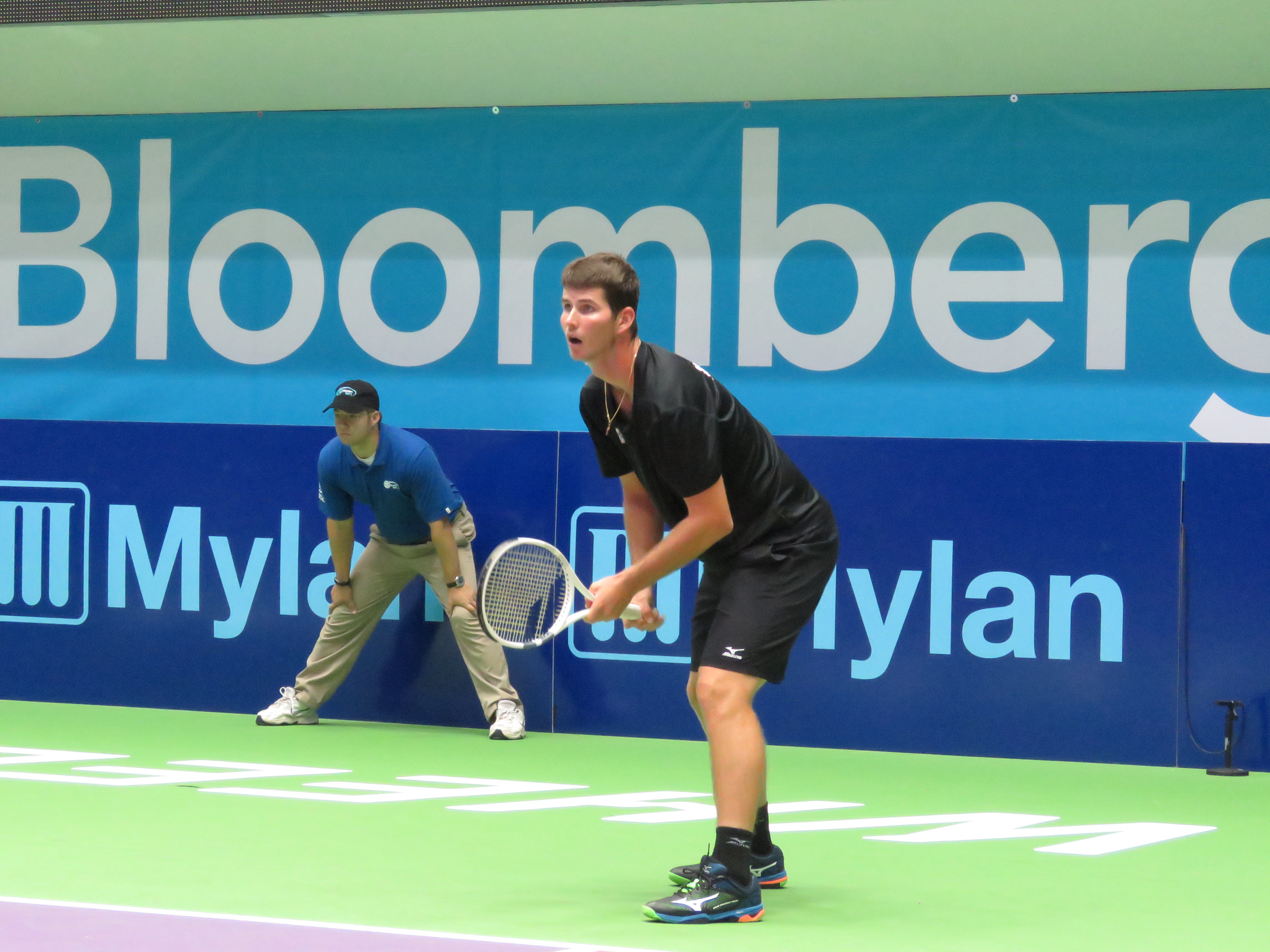 Novikov secured a mini-break midway through the tiebreaker and hit big serves to clinch the set. The match score was 24-18 Kastles, but since the winning team must win the final game, Kyrgios and Novikov continued playing.

Kyrgios stormed to a quick 3-0 (the equivalent of 40-0) lead on Novikov’s serve and held four match points, but Novikov saved them all and held once more. The Aussie won his next service game to close out the 25-19 victory over the Breakers. 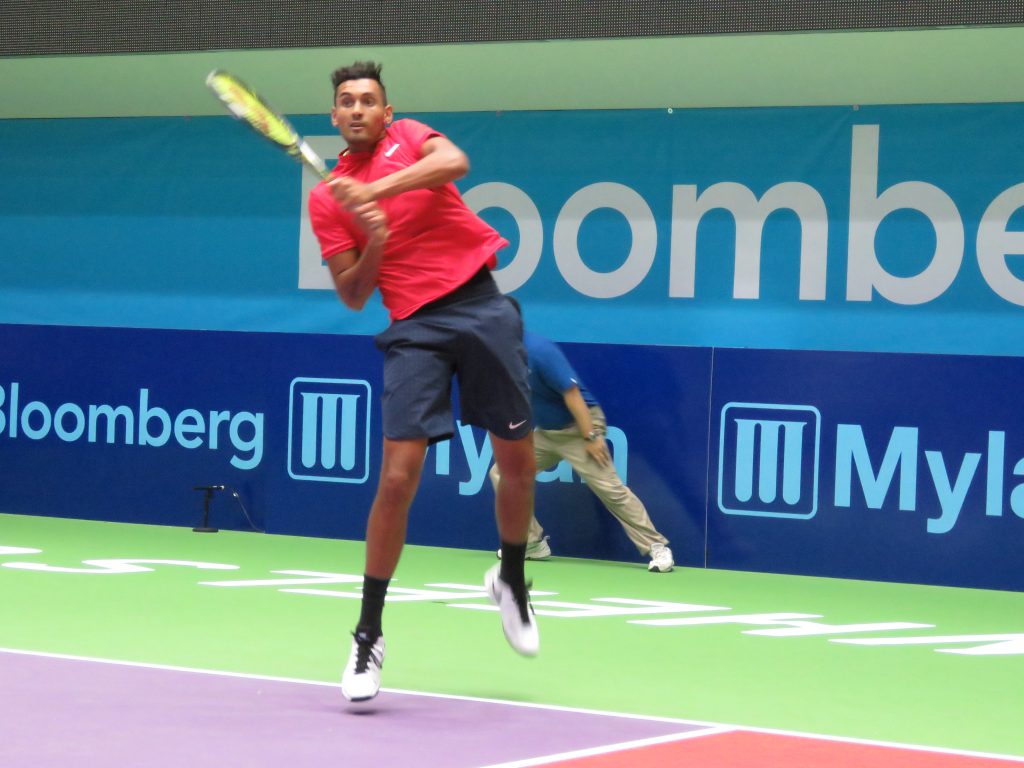 The Kastles (5-5) end the season without a postseason birth after 5 consecutive championships, but the strong finish and pickup of Kyrgios signals that DC’s future with WTT is a bright one. Mark Ein and the entire Kastles organization have done a fantastic job providing a more relaxed, entertaining, and fun team environment for the fans to enjoy professional tennis.

Special shoutout to Kastles Owner Mark Ein, General Manager Kevin Wynne, Wes Johnson (the amazing voice of the Kastles, Washington Capitals, and many videos games among others), stilt walker and entertainment talent Leighton Condell, Jack, Silas, and Sam from Levick, Metro DC DJs and Entertainment, Chris, and the entire Kastles organization. They put in a ton of work to bring the DC-area professional tennis in a highly-entertaining team setting, and it was a pleasure to meet them at the match.

Major props to the entire @washkastles organization for another fantastic season! They put in a lot of hard work to make every match fun for the fans. @markdein1 @worldteamtennis #wtt #kastles #tennis #dc #tennisfiles

Hopefully the WTT can expand the number of teams in the league and expose more fans to this highly entertaining and enjoyable tennis format. What fans wouldn’t want to enjoy professional tennis, great music, stilt walking, enthusiastic commentary, and root for a team of world-class tennis players like Martina Hingis, Leander Paes, and Nick Kyrgios? Until next season, Kastles!