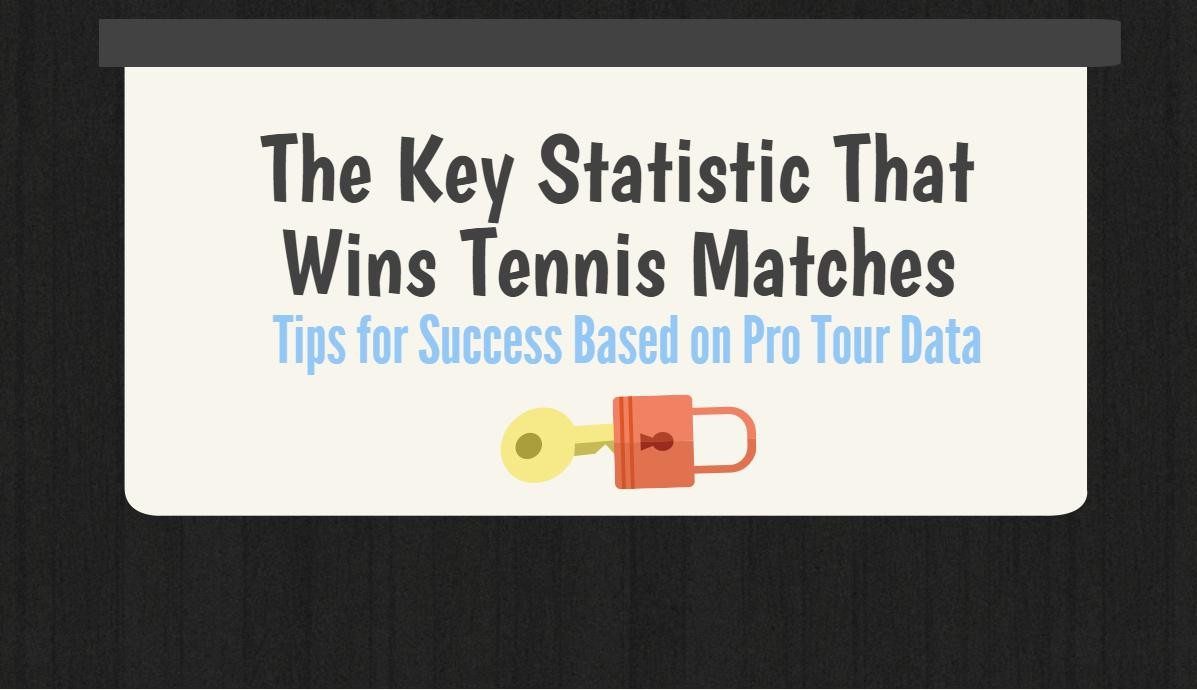 The key statistic that wins tennis matches more than any other is second serve points won percentage. How do I know this?

I've got the raw data to prove it.

Take a look at the infographic I created below. The player who had the higher second serve points won percentage won 4 out of the last 5 grand slam finals.

And 6 out of the top 10 male players in the world are among the top 10 in second serve points won percentage.

The women's game isn't much different: based on the 2015 WTA Tour stats, more than half of the top 10 female players in second serve points won percentage are in the top 15 of the WTA rankings.

What does all this mean?  It means that winning more second serve points than your opponent is crucial, and likely indicative, of whether you will win a match.

How Do I Win More Second Serve Points?

Your opponent will feast on your second serve if it is weak. Throw in some double faults and you are in for a rough outing. Having a strong second serve indicates how you perform under pressure. After all, if you don't hit the second serve in, you lose the point. There is seldom more pressure in a match than a second-serve on break or set point.

The ability to serve the ball in different areas of the service box is invaluable. You can formulate a second-serve strategy based on your opponents strengths and weaknesses. Placement is much more important than power. Perhaps you want to stay away from the forehand and kick out wide to the backhand. If you can swing your opponent out wide or consistently serve to the weaker side, you will have the upper hand in the point virtually every time. The next time you practice your serve, set up targets inside the service line, get a feel for the different types of spin you can produce when serving (slice, topspin, kick), and aim for the targets.

Generally, players have trouble handling heavy spin (Nadal, anyone?). And when you hit a second serve, you want to give yourself a wider margin for error. Further, you do not want to slow down your swing. Therefore, you need to hit with more spin on your serve. Practice the various spins and utilize topspin and kick serves for a majority of your second serves, as they are safer than flat or slice serves because of the higher net clearance. Remember, spin for the win!

Often, players hit the second serve with no goal in mind.  Instead, you should figure out how to set up the point to your advantage with your second serve.  Do you want to kick out wide so you can hit the next shot to the opposite corner?  Should you target the backhand because it is weaker and can't hurt you?  Will a second serve to the body have the best chance at yielding a short ball or error?  Perhaps you should serve down the T because you cut down the angle your opponent has for the return? Before you hit the second serve, ask yourself how you want the the point to play out.  Having a plan each time you approach the baseline to serve will lead to more second serve points won (and reduce the pressure too).

4. Prepare for the Return

Once you hit the second serve, be prepared for the return. Anticipate where your opponent may hit the return before he or she makes contact with the ball.  Figure out your opponent's return game tendencies, be ready to track down a short reply if you serve to a weakness, and don't be afraid of the return if you know the opponent is going to pound it. Instead, split step right before your opponent hits the ball, figure out where the ball is going as soon as possible, and get in position to hit a good shot off the return!

As the old saying goes: "You are only as good as your second serve."

TFP 276: 8 Keys Tennis Players Need to Level Up Their Games

TFP 271: Why Obsession is the Key to Your Tennis Success with Peter Freeman

TFP 278: Doubles Strategy for Club Level Players with Will Boucek

TFP 277: The 8 Racquets I’m Testing To Choose My Next Stick with Sam Jones

TFP 275: 5 Doubles Strategies to Use Against Aggressive Opponents

TFP 274: How to Use Mindfulness to Develop a Winning Mindset with Meike Babel