How to Handle the Pressure on Big Points 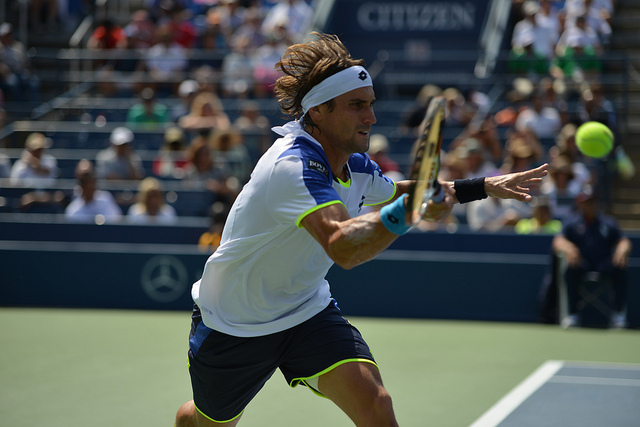 Most of us dread playing under pressure.  It's 5-all in the tiebreaker and doubts begin to creep into your mind.  Your hands start sweating, you think about how badly you need to win the point, and you picture yourself double faulting to a chorus of boos and face-palms.  This is how most people think before playing a big point, and it needs to stop.

I know, because the negative, unproductive thoughts above have entered my head before hundreds of crucial points in matches.  Lots of experience and learning from the best coaches and players has made me change the way I think about playing big points.

Let's walk through the right mental and strategic approach to help you handle the pressure and perform optimally on the most important points in your tennis matches.

Stay focused on what you need to do during the point.  No longer will you think about the pressure of the big point and the results. Instead, you will hone in on where you need to hit the ball to give you the best chance of winning the point.  If you think about how important the point is, you occupy your mind with negative thoughts that freeze your mind and cause anxiety. Then you'll have no time to actually think about how you can win the point, which makes all the difference in a match unless there is a big gap in between skill levels.

I've said this time and time again, but it is worth repeating: you need to focus on the process, not the results.  You also do not want to fixate excessively on your technique, which is what a lot of players do during big points, especially on the serve.  At most, you may choose one big concept to focus on during the serve (i.e. head up, or toss out in front).  Any more than this will overload your brain and almost guarantee a double fault.

To hear more about how crucial focusing on the process is to your tennis game, check out The Tennis Files Podcast, Episode 2: Focus on the Process with Keith Puryear.

Step 2: Play to your Strengths

Before a big point, ask yourself this: what is the strongest part of my game?  Here's why: in times of pressure, you are most likely to succeed if you structure the point around your greatest strength.  Naturally, if you have a reliable forehand, or play your best tennis at net, then by playing to that strength, you have a smaller chance of making an error and a higher probability of executing the point successfully.  A skill is a strength because you are more often than not victorious when using it.

The problem with most amateur players is they think they have to do something spectacular or out of the ordinary in order to win a big point.  For example, instead of utilizing the player's favorite play (for example, a serve to the backhand to set up a forehand), a player might employ a strategy he doesn't do very often (like hit a slice serve and come into net).  The problem with this is most amateurs cannot execute a wide variety of plays with an equally high success rate and degree of comfort. Accordingly, you will have a higher chance of making an error when you run plays you are not used to making very often.

On the other hand, if you build a big point around your strength, it follows that you will have a higher chance of winning the point because you optimize the point according to what skill or strategy has been most successful for you.  And equally important, you will be more comfortable during the point because you know you are playing the point the way you want to play it; with the strongest and most reliable tools in your toolbox.  I like to keep it simple and tell myself: "set up the forehand."

For more on playing to your strengths during big points, check out The Tennis Files Podcast, Episode 3: How to Become a Professional Tennis Player with Paul Harsanyi.

To give you an even bigger edge during crucial points, play high-percentage tennis.  Most points at the amateur level, and even in the pros, are won because of errors (mostly unforced errors for us non world-ranked folks).

How do we minimize the chance of making errors?

First, hit the ball with more height and spin.  This severely decreases the likelihood of hitting the ball into the net, which is how a huge amount of errors occur.

Second, don't go for the lines.  Your best bet is to aim for depth or big targets as opposed to going for the outright winner.

Third, focus on depth.  The great thing about hitting deep is that it is very difficult to attack deep balls, and it is also tough to handle them.  If you can hit enough balls deep consistently, your opponent will eventually cough up a short ball. THIS is the time where you should take the offensive, because the ball will be both short and travel slower, so you will have more time and more angles of the court to attack into.

Think about the inverse of Step #2: your opponent's weaknesses.  If a player has the best chance of winning a point with their strengths, it naturally follows they will have the lowest chance of winning the point when forced to play with their weaknesses. It is your job to recognize those weaknesses and exploit them.  As Keith said on TFP 002, matches are won by pressuring your opponent into hitting uncomfortable shots.

If you can use your strength to exploit your opponent's biggest weakness, then you have a powerful recipe for success, ESPECIALLY on big points.  Your opponent has a higher likelihood of making an error during high-pressure situations if they are forced into a scenario where they are least likely to succeed.  A weak backhand or high-volley is more likely to break down on crucial points.

Step 5: Remember - Pressure is a Chance to Prove Yourself

I have to credit former ATP pro Paul Harsanyi for this advice, who I interviewed on Episode 3 of The Tennis Files Podcast.  He used to be scared of playing matches when he was a junior. In fact, Paul said it was the biggest obstacle he had to overcome when he first started playing tournaments.  But then someone told him: "Pressure is a chance to prove yourself."

If you can turn your fear of losing into an opportunity to show everyone what you are made of, you will be a very successful tennis player and person.  Don't let fear rule you; fight the fear and revel in the chance you are presented to prove your worth.

Whenever you face a big point, remember: strategize, play to your strengths, utilize high-percentage tennis, exploit weaknesses, and persevere over adversity.  Focus on playing the point to your advantage and positive results will follow.

TFP 176: Get FASTER On the Court with Lee Taft

TFP 175: How to Develop a Consistent Second Serve