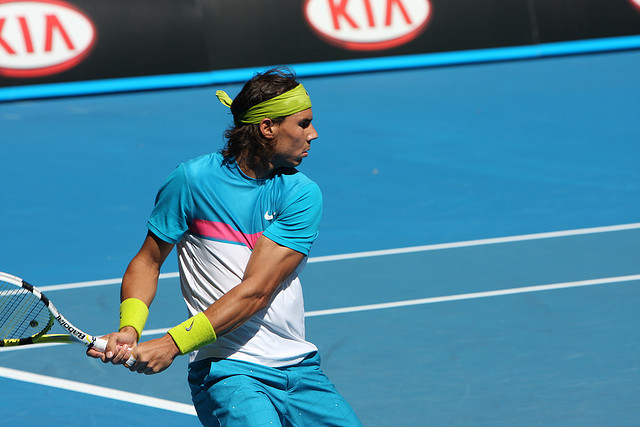 I had the pleasure of meeting distinguished author Scoop Malinowski at the 2015 Citi Open. I was getting a bottle of water in the media tent when Scoop greeted me and mentioned his latest book: Facing Nadal: Symposium of a Champion. Scoop was

kind enough to give me a copy to read.
Facing Nadal: Symposium of a Champion is composed of interviews from over 50 ATP players – including Novak Djokovic, Roger Federer, Pete Sampras, John Isner, Juan Martin Del Potro, Lleyton Hewitt, Jimmy Connors, Carlos Moya, Pat Cash, Stefan Kozlov, Feliciano Lopez, Thanasi Kokkinakis, Francis Tiafoe, Radek Stepanek, Ivan Ljubicic, James Blake, Marat Safin, and of course, Rafael Nadal.
All of the interviewees describe their matches and unique experiences with Nadal. The book also includes in-depth interviews with ATP coaches, media, celebrity, fan, and other tennis personalities about the difficulties and different approaches taken when preparing to play against The King of Clay.
Facing Nadal: Symposium of a Champion makes it seem like you are sitting in a press conference listening to the thoughts of some of the best players in the game. I particularly enjoyed hearing the mindset of the pros before having to face Rafa. Learning how the top players in the world mentally prepare for matches and handle victory and defeat is fascinating and can help you improve your mental approach to competitive tennis.
Chapters 1 and 2 contain interviews from media, insiders, and ATP players about Rafa Nadal. In Chapter 3, Nadal talks about specific match experiences and his thought processes throughout his career. Chapters 4-6 contain more interviews from ATP pros and coaches about Rafa. Chapter 7 closes with Nadal’s 2005 match record as a teenager and an interview, which is an unexpected way to end the book. Facing Nadal also has some cool pictures of Rafa at the end (and in the beginning of each chapter), although I would have preferred them in color instead of black and white.  The book is 220 pages long.
Scoop’s fourth book helps us learn more about the greatest clay court player and one of the legends in the game from top notch tennis personalities who interact and compete against him. It is definitely an interesting read for both Rafa fanatics and everyday tennis fans alike.
If you don’t mind the interview format, I recommend you check out this book. While some thoughts about Rafa are repeated among the interviewees, it is interesting to hear about Rafa from so many of the top players, media, and coaches, especially from Rafa himself. If you didn’t think Rafa was that humble or ferocious of a competitor, I think you will after reading this book.
Overall, I think that Facing Nadal: Symposium of a Champion is an enjoyable read and provides a closer look into Rafa’s game, personality, and passion for the game of tennis.
Below is an excerpt from the book.

TFP 038: How to Choose a Racquet with Wilson Sales Manager Preston Lemon