The 54 Best Tennis Puns on the Planet 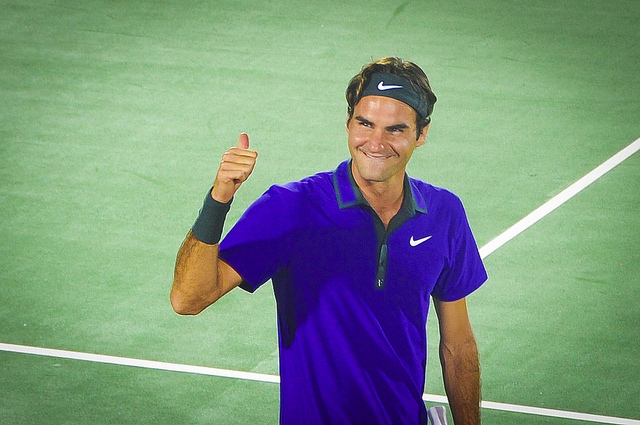 Everyone loves a good pun. I’m quite fond of them, so I wrote down 54 of the best tennis puns I could think of in 30 minutes. Many of my friends say I have a talent for creating puns. Read them all and let me know what you think.

Tennis Puns – Read at Your Own Risk

1. Is your eyesight as bad as your cell phone reception? Because that was a terrible call.

2. The walls in this tennis factory are so thin, that when I try to get some work done, all I hear is people making a racquet.

3. Do you always play this badly at the net? Because I don’t like your approach.

4. Fred is so condescending about my tennis strokes. I can’t take any more of his backhanded compliments.

5. Did you see the guy with quad-arms play tennis? He has a great four-hand.

6. Pick-up line: You might as well play be a tennis player, because I’m about to court you girl.

7. Is your nickname cream cheese? Because you’re about to get bageled.

8. American Indians used to have their own professional tennis tournaments, and provided free housing to players from other tribes. They called it the A Tee Pee Tour. (I mean no disrespect to American Indians!)

9. I can’t believe I framed the ball in for a winner. Shank you!

10. Oh, I thought I was playing the first round, but I guess I got a free pass. Bye.

11. Is there a bathroom in this tennis club? Because I’m about to drop a deuce.

12. Djokovic to his friends the morning after winning the U.S. Open: Is anyone hungry for some Denny’s? Because I would like another Grand Slam. (disclaimer: I don’t think he’s ever said this 🙂 )

14. An orange and an apple signed up for a tournament. No one was surprised to find out they were both seeded.

15. I prefer the new system to reviewing line calls. When Hawk-eye came around, I breathed a big Cy-clops of relief.

16. The guy missed both his serves on match point. I won by de-fault.

17. Both tournament directors published the schedule at the same time. It was a draw.

18. You can never get short balls over the net! Solution: Drop shot from arsenal.

19. Too bad my serve hit the tape. Well, at least they’ll LET me hit it again.

20. Federer is such a legend that they named the Roger’s Cup, and Fed Cup after him.

21. Tennis is a lot like waiting tables. The most important thing to get right is the first serve.

22. I wish they’d change the scoring system, but tennis is set in its ways and doesn’t see the point.

23. I tried to hit the picture cleanly over the fence, but it was framed.

24. Why can’t I ever win a game returning serve? Give me a break.

25. I have one animal in my farm who I look up to more than Federer: GOAT.

27. I really hate these strings. I can feel it in my gut.

28. Does this guy work with computers? He looks like a hacker.

29. The density of this concrete leads me to believe one thing: it is a hard court.

30. Two birds played a tennis match. Ironically, the one that made the worst calls was a Hawk….aye!

31. I want to practice my forehand outside, but it will be wet in the morning and nice later on. So here’s the plan for today: inside-out.

32. I’d like to throw away my old can, but my pusher friend here says he loves junk balls.

33. Mary didn’t miss a first serve the entire match. It was not her fault she lost.

34. My friend Elmer’s has gotten really good at tennis ever since he stuck to a healthier diet and went glue-ten free.

35. What time should I book the court? Let’s shoot for around tennish.

36. I want to play my match outdoors so I can hit the ball higher in the air. I’m not good at persuading people, so I’m going to hire a lob-byist.

38. The last thing I can remember was the yellow ball speeding toward me. I swung the racquet, and then things got fuzzy.

39. I’m a baseliner and I don’t know how to volley: my game would disappear if I went to no-man’s land.

40. A hippie when his opponent disputes his calls: That’s pretty far-out, man!

41. A man named Martin Draw was campaigning for the Senate. He printed up shirts saying “I’m with Draw” to support his campaign. The next day, he wore the shirt to a tennis tournament. When he walked up to the tournament desk, the director handed him his money back and asked him why he couldn’t play.

43. I got so mad at my partner hitting moonballs, I had to pusher off the court.

44. They call me Ace, because you just got served.

46. Ana hits a lot of floating shots that her opponents destroy for winners. We need to sitter down and have a talk.

47. I am disappointed that you are taking such a closed-stance on my footwork advice.

48. If you want to impress the crowd, hit overheads. Every point will be a smash hit.

49. Two racquets started dating. Unfortunately, one was stringing the other along without any intention of tying the knot.

50. Jack has a large neck so he decided to wear a bowtie to his wedding. Otherwise, he’d end up with a tiebreak.

52. The injured player wanted to congratulate the winner, but he couldn’t walkover to the other side of the court.

53. Most of your players never make it out of the lower-level tournaments. I highly doubt their Futures as a professional.

54. It feels great to hit the ball again. It spin a long time.

Congratulations! You made it through the entire list (or scrolled down as fast as you could out of frustration)! I hope you got a laugh out of at least a few of my tennis puns and didn’t get the urge to hit your head against the wall too many times.

TFP 247: Preparing for Intense Practices, Developing Consistency, and the Keys to Improving Your Serve with Mike Digby